I am thrilled to be hosting a spot on the IT’S THE END OF THE WORLD AND I’M IN MY BATHING SUIT by Justin A. Reynolds Blog Tour hosted by Rockstar Book Tours. Check out my post and make sure to enter the giveaway! 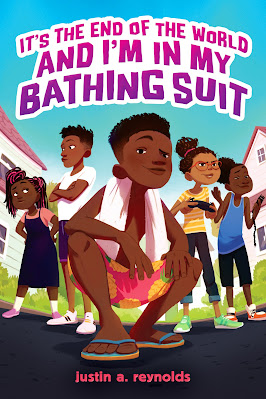 Title: IT’S THE END OF THE WORLD AND I’M IN MY BATHING SUIT

Twelve-year-old Eddie Gordon Holloway has concocted his most genius plan ever to avoid
chores… especially the dreaded L-A-U-N-D-R-Y. If he can wear all the clothes he owns, he’ll only have to do the laundry once during his school break.

On the day of the highly anticipated Beach Bash, Eddie’s monstrous pile of dirty laundry is found by his mom. And Eddie’s day has just taken a turn for the worst. Now he’s stuck at home by himself, missing the bash, and doing his whole pile of laundry. But mid-cycle, the power goes out!

With his first load of laundry wet and the rest of his stuff still filthy, he sets out to explore the seemingly empty neighborhood in his glow-in-the-dark swim trunks, flip-flops, and a beach towel. He soon meets up with other neighborhood kids: newcomer Xavier (who was mid-haircut and has half his head shaved), Eddie’s former friend Sonia (who has spent her entire break trying to beat a video game and was mid-battle with the final boss), and siblings Trey and Sage (who are dealing with major sibling drama).

As they group up to cover more ground and find out what happened, they realize that their families aren’t coming back anytime soon. And as night falls, the crew realizes that they aren’t just the only people left in the neighborhood, they might be the only people left… anywhere.

Before I begin my review I quickly have to say thank you to Rockstar Book Tours for allowing me to be a part of this book tour and to Scholastics for graciously providing me an eArc of the book to read for my review stop today.

This was definitely a fun and funny read and one that I highly recommend if you have a middle-grade boy as I am sure they would appreciate the humor in this.

The main character is a twelve-year-old boy named Eddie and he is starting summer vacation. Eddie has made a deal with his mom and stepdad to be more responsible this summer with keeping up with doing his laundry if they promise to give him a little more freedom. Eddie has a plan that each day he will wear his clothes once and hid them so that they think he is doing laundry with the hopes of doing it once.

Well yes, that sounds like a good plan, but you must know that all good plans don’t go according to plan, and that’s exactly what happens to Eddie. He gets busted by his mom. The worse part is that he gets busted on the eve of the summer bash and she gives him two choices of you either do the laundry or you can’t go to the summer bash. Eddie wants to go so he decides to try and butter up his stepdad in hopes he will go against his mom because he really doesn’t want to spend the night washing/drying his clothes, but stepdad stands his ground. So Eddie has no choice but to haul all his clothes to the basement and wash them. Although he does realize he can speed up the process.

Now we all know that this might be a quick and easy solution to the problem but the karma Gods will come and bite you in the butt just like they did Eddie because no sooner is he in the process of washing and drying his clothes the power goes out. This is not good so when it doesn’t come back on Eddie goes to investigate what is happening. He bumps into his friends on the street and they soon realize they are the only ones out. What is going on? Where is everyone?

Definitely excited to see where this will go.

About Justin A. Reynolds: 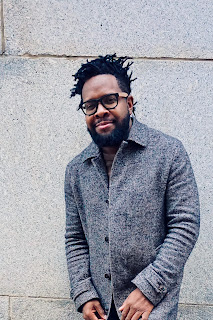 JUSTIN A. REYNOLDS has always wanted to be a writer. Opposite of Always, his
debut novel, was an Indies Introduce selection, a School Library Journal Best
Book, has been translated in 17 languages, and is being developed for film with
Paramount Players. He hangs out in northeast Ohio with his family and likes it,
and is probably somewhere, right now, dancing terribly. His second novel, Early
Departures, published September 2020. In spring 2021, he teamed up with
Marvel and Graphix to release his debut graphic novel, Miles Morales: Shock
Waves. You can find him at justinareynolds.com.

1 winner
will receive a finished copy of IT’S THE END OF THE WORLD AND I’M IN MY BATHING SUIT, US Only.