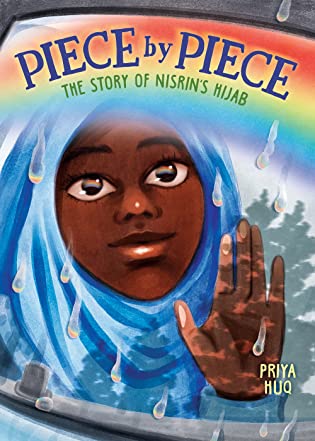 Piece by Piece: The Story of Nisrin's Hijab by Priya Huq
Published by Amulet Books on September 14, 2021
Pages: 224
Goodreads

In this middle-grade graphic novel, Nisrin will have to rely on faith, friends, and family to help her recover after she is the target of a hate crime

Nisrin is a 13-year-old Bangladeshi-American girl living in Milwaukie, Oregon, in 2002. As she nears the end of eighth grade, she gives a presentation for World Culture Day about Bangladesh while wearing a traditional cultural dress. On her way home, she is the victim of a hate crime when a man violently attacks her for wearing a headscarf.

Deeply traumatized by the experience, Nisrin spends the summer depressed and isolated. Other than weekly therapy, Nisrin doesn’t leave the house until fall arrives and it’s time for her to start freshman year at a new school. The night before class starts, Nisrin makes a decision. She tells her family she’s going to start wearing hijab, much to their dismay. Her mother and grandparent’s shocked and angry reactions confuse her—but they only strengthen her resolve.

This choice puts Nisrin on a path to not only discover more about Islam, but also her family’s complicated relationship with the religion, and the reasons they left Bangladesh in the first place. On top of everything else, she’s struggling to fit in at school—her hijab makes her a target for students and faculty alike. But with the help from old friends and new, Nisrin is starting to figure out what really makes her happy. Piece by Piece is an original graphic novel about growing up and choosing your own path, even if it leads you to a different place than you expected.

I quickly have to thank Abrams Books for providing a free egalley of Piece by Piece The Story of Nisrin’s Hijab by Priya Huq and SLJ Teen Live because otherwise, I would not have known about this middle-grade graphic novel. I picked this up recently when I attended virtually the SLJ Teen Live event.

The egally was in black and white but I definitely want to see this one in color. From the sample page, it looks like it will be a bright and vibrate graphic novel.

This is an OWN’s voice graphic novel.

I definitely have to add that there is a few trigger warnings to this such as assault, trama. mental health etc

Our main character Nisrin is attacked one-day leaving middle school for wearing a hijab. In the beginning, she was wearing to show what it looks like. She never thought she would wear it daily.

She takes the summer to recover from her attack. This is when she decides she wants to wear it all the time to her family’s dismay. They all tell her no but she stands up for herself and wears it anyway. Nisrin quickly realizes that everyone hates it. They quickly judge her for it, but Nisrin persists in wearing it. Its thanks to her cousins and her researching on Islam that she feels closer to God.

It was definitely a bit heartbreaking in the beginning when Nisrin was attacked. You can’t help but want to applaud Nisrin for standing up for what she believes as everyone should.