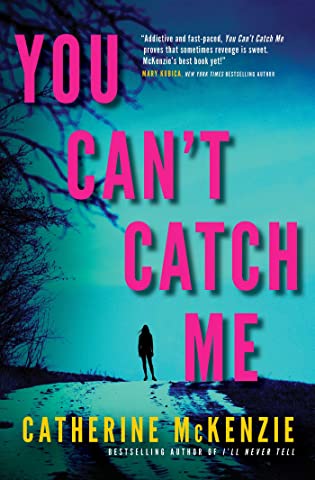 You Can't Catch Me by Catherine McKenzie
Published by Simon & Schuster Canada on June 9, 2020
Pages: 400
Goodreads

A riveting new novel of suspense about a disgraced young journalist caught up in a grifter’s game, and the trail of identically named victims she uncovers, from the instant bestselling author of I’ll Never Tell and The Good Liar.
Assumed identities. A con game. Unwitting victims.
After being fired from her investigative journalism job for plagiarism, Jessica Williams is looking for a break from the constant press coverage. She decides to escape for a week to a resort in Mexico boasting no connections to the outside world. While waiting at the airport for her flight, she encounters a woman with the exact same name, who she dubs Jessica Two. Drawn together by the coincidence, they play a game of twenty questions to see what other similarities they share, and exchange contact information.
A week later, Jessica returns home and discover that large cash withdrawals have been made from her bank account. Security footage from the bank confirms her suspicions—Jessica Two has stolen her money. She goes to the police, only to be told that the crime is a low priority. Frustrated, she meets up with a trusted old friend, Liam, who is an investigator. When the two Google “Jessica Williams,” they get thousands of hits—Jessica was the most popular girl’s name in 1990 and Williams is almost as ubiquitous as Smith. Convinced that this isn’t the first time this scam has been run, Jessica is determined to catch the imposter, and writes a Facebook post hoping to chase down some of Jessica Two’s other victims. When she gets a number of responses, she sets a plan in motion to catch the thief, encountering a string of identically named victims along the way.
Then, the threatening messages start arriving.
Filled with incredible twists and turns, You Can’t Catch Me is a tantalizing, character-driven exploration of how far people will go to get revenge.

I have had so much fun highlighting all of Catherine’s books here on the blog and updating my reviews with my current thoughts this past week and a half. It’s hard to believe that after tomorrow’s review of Six Weeks to Live that I will have to wait almost a whole year for her next book to come out.

You Can’t Catch me is another one of those psychological / mysteries that I literally couldn’t put down once I started it. Just when I think how is Catherine going to top the last book she smashes out of the ballpark one again. This was another book that I managed to almost read in one sitting. I was instantly hooked. This book had me all over the place with the twists and turns. Just when you think you have it figured out, you really don’t have it figured out.

Have you ever googled your name or even searched for it on Facebook to see how many people share your name? I know I use to do it all the time and I found a ton with my name and there is even an author with my name. I was once messaged by someone with my name saying she was trying to connect with others with our name. Thankfully I read Catherine’s book first and never replied back… LOL

Our main character is Jessica Williams and after being in a cult (The Land of Todd) for 12 years she was able to escape with the help of Liam, a private investigator. Jessica wants nothing but to blend in and not stand out. She has managed to change her life around and goes to school to be a journalist/ writer.

It’s while sitting in an airport bar that things go from good to bad for Jessica but she won’t know it right away because once she boards the plane she turns her phone off. While waiting for a drink the waitress calls her name she replies as does another woman. At first, she thinks nothing of it because it’s a common name well it’s only once the two women start to talk that Jessica gets a little freaked out because they both have the exact same birthday. They exchange phone numbers and this is where it all goes downhill for our MC Jessica because she allows Jessica 2 to tap the phones together. Once back from her trip Jessica (#1) realizes that she is broke, her bank account has 0 funds. She begins to put two and two together and realizes what Jessica 2 has done.

She asks Liam for help and upon her research, she discovers she is not the only Jessica Williams that has been targeted by Jessica #2. Jessica reaches out to two other victims and follows Jessica 2’s trial. All the women have similar stories of their interactions with Jessica 2. Will Jessica (mc) be able to catch Jessica 2 or will Jessica’s threat of you can’t catch me happen?

Okay, so this is where I am going to stop my review and urge you to go and get a copy of the book to see for yourself. This book will literally take you on a roller coaster.

The only thing I have to say is to be careful if someone sits next to you with the same name as you, don’t play their game because they will be taking all the information you and never let them have access to your phone.