Sadly I wasn’t able to attend this year just because it wasn’t doable. With the current exchange rate the major factor in all this plus NYC is expensive. I hope everyone that is going will have fun and I will miss seeing you all but look forward to seeing your posts etc. Hopefully I will see you all next year.

So with that being said I thought I would share some of the books from Book Expo that have made it onto my wishlist of books to get when they come out. 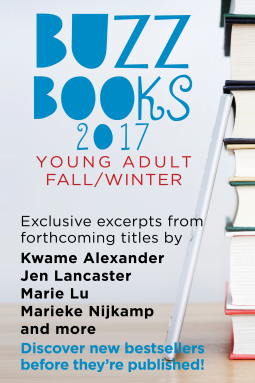 Today’s post is going to be another one  about the young adult books.

Have you spotted anything you want to read?

This is always a great and handy tool to read before heading to Book Expo because sometimes the upcoming books are actually there.

After spotting this book and downloading it from Netgalley I seriously can’t wait for these to come out. In the past they use to put these two two times a year but since January they have been doing a monthly buzz which is also a great resource for upcoming titles, so it was nice to see that they still plan on doing the special editions as well.

The Buzz Books 2017 Fall/Winter edition features was  huge with so many exclusive excerpts of new  titles. Each title includes the cover of the book, summary and a few chapters. Just enough to suck you into wanting to read the book or books asap. It covers fiction, debut fiction, and non fiction.

Here is the titles that are included in this Buzz Books and ones that caught my eye that I want to read when they are released:

Girls Made of Snow and Glass by Melissa Bashardoust. This comes out in September from Flatiron Books. This is a debut novel.

At sixteen, Mina’s mother is dead, her magician father is vicious, and her silent heart has never beat with love for anyone―has never beat at all, in fact, but she’d always thought that fact normal. She never guessed that her father cut out her heart and replaced it with one of glass. When she moves to Whitespring Castle and sees its king for the first time, Mina forms a plan: win the king’s heart with her beauty, become queen, and finally know love. The only catch is that she’ll have to become a stepmother.

Fifteen-year-old Lynet looks just like her late mother, and one day she discovers why: a magician created her out of snow in the dead queen’s image, at her father’s order. But despite being the dead queen made flesh, Lynet would rather be like her fierce and regal stepmother, Mina. She gets her wish when her father makes Lynet queen of the southern territories, displacing Mina. Now Mina is starting to look at Lynet with something like hatred, and Lynet must decide what to do―and who to be―to win back the only mother she’s ever known…or else defeat her once and for all.

Entwining the stories of both Lynet and Mina in the past and present, Girls Made of Snow and Glass traces the relationship of two young women doomed to be rivals from the start. Only one can win all, while the other must lose everything―unless both can find a way to reshape themselves and their story. 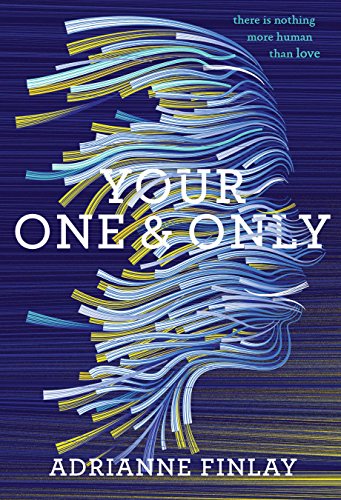 Your One & Only by Adrianne Finlay. This is a Feb 2018 release from Houghton Miffin Harcourt Books for Young Readers. This is her debut novel.

Jack is a walking fossil. The only human among a sea of clones. It’s been hundreds of years since humanity died off in the slow plague, leaving the clones behind to carry on human existence. Over time they’ve perfected their genes, moving further away from the imperfections of humanity. But if they really are perfect, why did they create Jack?

While Jack longs for acceptance, Althea-310 struggles with the feeling that she’s different from her sisters. Her fascination with Jack doesn’t help. As Althea and Jack’s connection grows stronger, so does the threat to their lives. What will happen if they do the unthinkable and fall in love?
The Gatekeepers by Jen Lancaster is scheduled to be released Sept 2017 from Harlequin Teen. This is her YA debut.

Anyone passing through North Shore, Illinois, would think it was the most picture-perfect place ever, with all the lakefront mansions and manicured hedges and iron gates. No one talks about the fact that the brilliant, talented kids in town have a terrible history of throwing themselves in front of commuter trains.

Meet Simone, the bohemian transfer student from London, who is thrust into the strange new reality of an American high school; Mallory, the hypercompetitive queen bee; and Stephen, the first-generation genius who struggles with crippling self-doubt. Each one is shocked when a popular classmate takes his own life and his death triggers more suicides. With so many students facing their own demons, can they find a way to save each other—as well as themselves?

Inspired by true events that happened in the author’s hometown, The Gatekeepers is a moving story that offers an unflinching look at the pressures teens face and the hope that tragedy can.

All Things New by Lauren Miller is scheduled to be released Aug 2017 from Three Saints Press.

Seventeen-year-old Jessa Gray has always felt broken inside, but she’s gotten very good at hiding it. No one at school knows about the panic attacks, the therapy that didn’t help, the anxiety meds that haven’t worked. But when a severe accident leaves her with a brain injury and noticeable scars, Jessa’s efforts to convince the world that she’s okay finally crumble–now she looks as shattered as she feels. Fleeing from her old life in Los Angeles, Jessa moves to Colorado to live with her dad, but things go from bad to worse when she realizes she’s seeing bruises and scars on the people around her that no one else can see. She blames it on the accident, but as her body heals and the hallucinations continue, Jessa wonders if what she’s seeing could somehow have a deeper meaning. In her quest for answers, she falls for Marshall, a boy with a heart defect whose kindness and generous spirit slowly draw Jessa out of her walled-off shell and into the broken, beautiful, real world–a place where souls get hurt just as badly as bodies, and we all need each other to heal.

ALL THINGS NEW is a love story about perception and truth, physical and emotional pain, and the messy, complicated people we are behind the masks we put on for the world, perfect for fans of ALL THE BRIGHT PLACES and THE FAULT IN OUR STARS. 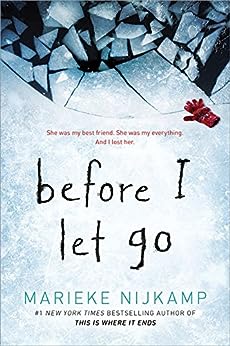 before I let you go by Marieke Nijkamp will be a January 2018 release from Sourcebooks Fire. This is her second book.

Days before Corey is to return home to the snow and ice of Lost Creek, Alaska, to visit her best friend, Kyra dies. Corey is devastated-and confused. The entire Lost community speaks in hushed tones about the town’s lost daughter, saying her death was meant to be. And they push Corey away like she’s a stranger.

Corey knows something is wrong. Lost is keeping secrets-chilling secrets. But piecing together the truth about what happened to her best friend may prove as difficult as lighting the sky in an Alaskan winter.

(I know I spoke about this book earlier this week but I just had to share it once again.)