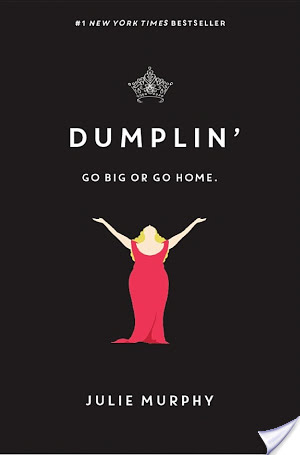 For fans of John Green and Rainbow Rowell comes this powerful novel with the most fearless heroine—self-proclaimed fat girl Willowdean Dickson—from Julie Murphy, the acclaimed author of Side Effects May Vary. With starry Texas nights, red candy suckers, Dolly Parton songs, and a wildly unforgettable heroine—Dumplin’ is guaranteed to steal your heart.Dubbed “Dumplin’” by her former beauty queen mom, Willowdean has always been at home in her own skin. Her thoughts on having the ultimate bikini body? Put a bikini on your body. With her all-American-beauty best friend, Ellen, by her side, things have always worked . . .  until Will takes a job at Harpy’s, the local fast-food joint. There she meets Private School Bo, a hot former jock. Will isn’t surprised to find herself attracted to Bo. But she is surprised when he seems to like her back.  Instead of finding new heights of self-assurance in her relationship with Bo, Will starts to doubt herself. So she sets out to take back her confidence by doing the most horrifying thing she can imagine: entering the Miss Teen Blue Bonnet Pageant—along with several other unlikely candidates—to show the world that she deserves to be up there as much as any twiggy girl does. Along the way, she’ll shock the hell out of Clover City—and maybe herself most of all.

Dumplin’ was a book I had picked up at BEA 2015 this past May and I finally managed to sneak it into my reading pile mainly thanks to Tina who wanted to borrow it to read so now I can officially tell her she can read it and pass it along.

I really like the cover its simple but it stands out when you look at it and I love “Go Big, Or Go Home!”

Willowdean otherwise knows as Willow (to her friends) or Dumplin’ (by her mother) is your typical high school girl who works part time at a fast food restaurant, she has a crush on one of her co-workers (Bo) and a best friend Ellen. She has a huge obsession with Dolly Parton.

One of the things I loved about Willow was that she was comfortable in her skin and she won’t change for anyone no matter what. Willow is a big girl with hips and curves. I think alot of girls will be able to relate to Willow.

Dumplin takes place roughly six months or so after her aunt Lucy dies. Aunt Lucy was a big girl as well. Willow’s world is slowly changing and she doesn’t like it. Willow lost the only person she felt like she could confide in and knew what Willow was going through and her struggles.

Willow’s mom is the complete opposite of Willow and her late aunt. She is thin and was a former beauty contestant winner and she makes it a point to run the beauty pagent every year. So you can see that they have a strained relationship.

Willow and Bo begin a summer romance where everything is kept on the down load and no one knows about them even Ellen has no clue about Willow and Bo. Willow was questioning why a cute guy like Bo would be interested in her when he could clearly have any other girl. Its at this point where she decides she needs to quit her job and get away from Bo because she can’t take being his secret girlfriend or the lies and the secretiveness.

Then enter Mitch who is the high school jock that plays football who takes a liking to Willow. I wish Willow would have given him more of a chance instead of using him like she did. I think Mitch could have been good for her.

You can tell Willow’s confidence is falling and she knows it too so she takes it upon herself to enter the beauty pagent and along the way other kids who are different begin to enter as well and they all look to Willow to guide them. Will Willow be able to follow through with the pagent or will it prove to be too much for her?

So much is going on in the book as you can tell from the book summary that it will keep you reading until you are done.