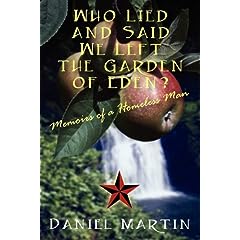 TITLE: Who Lied and Said We Left the Garden of Eden? Memoirs of a Homeless Man
AUTHOR: Daniel Martin
DATE: April 2008

For those of you who may not know Daniel Martin. He has overcome years of being homeless and overcome drug addictions. He is now a dedicated husband and father. He is also a successful small business owner. He runs his own plumbing company.

Reading his book I was able to in vision what my cousin is going through now. He has been homeless for almost 20 years and battling drug addiction too. I know he has tried rehab and nothing has worked. The last we heard he was somewhere in Toronto.

Who lied provides the first hand look into the life of Daniel. Daniel talks about his life on the streets of Texas and California. He talks about being a teenager who turns to drugs to get some relief from his family and his Christian up bringing. In order to feed his addiction he steals to get money and sells his body.

Daniel was in a few rehab and treatment programs. Each time after he relapses. He then finds the strength to come clean when a judge comes to his aid and sentences to him Cider House, which is located at the Norwalk State Hospital. Which by the way was the hospital where One Flew Over the Cuckoos Nest was filmed.

6 thoughts on “Review: Who Lied and Said We Left The Garden of Eden?”