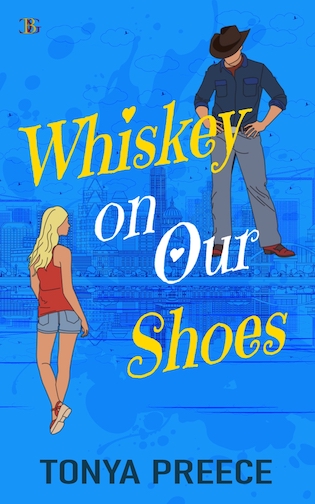 Eva dodges the fans, media, and gossip that follow her supermodel mom and rock star family members by wearing disguises. After an aimless gap year, she struggles to figure out what she wants from life. She moves in with her famous guitar god brother in Austin while he recovers from a drunken stage stunt accident and tries to stay sober. When a hot Texas cowboy named Alex takes Eva by surprise, she risks her safety and security of anonymity by letting him into her unconventional life.

Alex is captivated by Eva and promises to protect her privacy. Yet he has a secret of his own—the fling he had with an older woman is fraught with scandalous potential for him and now Eva. He broke free of that mistake months ago, or so he thought. As things heat up with Eva, his old flame returns and won’t leave him alone.

Just when Alex thinks he has the reins on the situation, his ex teams up with a gossip reporter hell-bent on invading Eva’s privacy. The resulting exposé, with a sly spin on a recent encounter with his ex, is Alex’s worst nightmare, and Eva’s unsure what to believe. Can she face the world with Alex at her side or will she return into hiding?

Alex takes a step back toward the swinging kitchen doors and takes a phone from his pocket.

Worried he’ll call the cops, I hop off the barstool and walk toward him, hands up to show I’m harmless. “I was kidding,” I say.

He freezes, shoulders back. His chest is broad. A brick wall. That’s what running into him upstairs felt like. His arm had gone around me, strong and warm, pulling me out of the way and—whoa. Heat creeps into my cheeks, despite the coolness of the kitchen.

Squelching the impulse to fan myself, I shift my focus to Alex’s face. There’s a spark in his deep blue eyes, like he caught me ogling him, and my whole face ignites. Damn fair skin.

What the hell am I doing? This guy poses a threat to mine and Lor’s privacy. He could blab what happened here to everyone.

So why am I thinking of his warm, spicy scent?

I clear my throat. “We wouldn’t kill you. Right, Hector?”

“You’re safe, man.” Hector hands us each a glass of tea.

Alex’s posture relaxes some, but he doesn’t take a drink. He watches me sip mine. I switch from holding the glass with my left hand to my right and wonder if he noticed I don’t have a left index finger. If so, he’s hiding his reaction better than Nadine at ACR did.

He pockets his phone. “Okay, what shouldn’t I have seen or heard?”

“I’ll let her explain it,” I say as Jojo breezes back into the kitchen, NDA in hand. There are perks to having Lor’s personal assistant on the premises.

“Have a seat, Alex.” She sets the papers on the bar. “This is a standard non-disclosure agreement. The band’s keeping DeLorean’s injuries private while he’s recovering.”

Alex shrugs. “Fine. I won’t tell anyone. I don’t even have any idea what’s wrong with him.”

Jojo hands him a pen. “Good. By signing this, you also agree to not mention anything of DeLorean having a sister.”

“No,” Hector tells him. “She works hard to stay anonymous. You must forget everything about her.” His tough guy act warms my heart, but he’s no bigger than me, with not much more muscle.

Alex, on the other hand is clearly shredded.

“Don’t worry. I can keep a secret.” His eyes are full of understanding.

“Great.” I gesture to the NDA. He breaks our gaze and reads it. And I mean, he really reads it, like word for word. Finally, he signs it and hands it to Jojo.

A splash mark on his left boot catches my eye as we walk through the foyer. I point at the dark spot. “Oh no, some of the whiskey got on you. I can have Jojo arrange to replace them.”

“No, it’s fine.” He stops at the door. “But maybe I could get your number?” From the way his Adam’s apple bobs with a swallow, I sense he surprised himself as much as me.

“Um…” I’m tempted, but what is happening? He’s supposed to leave and forget me. I need to forget him. Our lives are so different. “I’m not sure it’s a good idea.” I open the door.

Disappointment flickers in his eyes. He nods and goes past me, through the open door. Heading for the black truck, he puts his cowboy hat on and glances over his shoulder at me with what could only be described as a wistful smile. I almost grin back but decide not to encourage him. 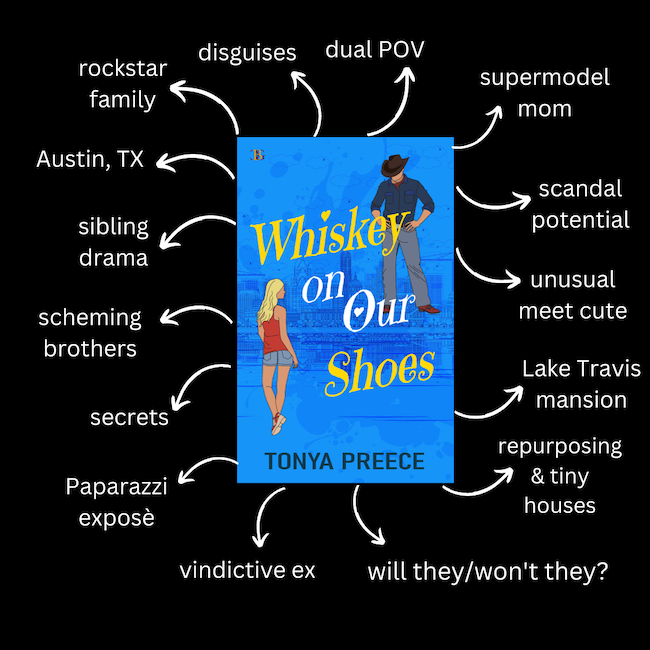 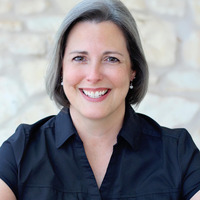 Tonya Preece writes romance and contemporary young adult fiction and incorporates music into all her books in one way or another. She lives near Austin, TX where she’s a small business manager for a forensic engineering firm. She and her husband enjoy traveling, live music, wine, and spoiling their fur babies.

As an active SCBWI member since 2015, Tonya has volunteered for several conferences and has served as a critique group facilitator. She joined the Writer’s League of Texas and The Author’s Guild in 2021. She’s serving as the 2022 WriteOnCon Financial Administrator and Critique Boutique Coordinator.

Tonya’s 2022 debut, Whiskey on Our Shoes, was selected for the 2019 #WriteMentor program. One of her YA novels, THE MISSING MEMORIES OF CORDY O’REILLY, earned her a 2020 scholarship/mentorship with Austin SCBWI and was a finalist at the 2018 Houston SCBWI conference.

An avid consumer of written stories, Tonya reads and/or listens to an average of 75 books a year. Some of her favorite YA authors include Jeff Zentner, Julie Buxbaum, Sarah Dessen, and Robin Benway. In adult romance – Kate Clayborn, Christina Lauren, Helena Hunting, Emily Henry, and Abby Jimenez. Series she tries to keep up to date on: Rhys Bowen’s Royal Spyness and Janet Evanovich’s Stephanie Plum. Recent mainstream faves are Where the Crawdads Sing by Delia Owens and Daisy Jones & the Six by Taylor Jenkins Reid.

1. She volunteers at a local food pantry, where she’s enjoyed serving weekly since 2017.

2. Her travel bucket list includes Italy, Ireland, and Bora Bora. Australia would be awesome, too!

4. She’s a fan of bands like With Confidence, Broadside, All Time Low, State Champs, Sleeping with Sirens, and As It Is.

5. 5. In her free time, she can be found indulging a jigsaw puzzle habit and/or binging shows like Outer Banks, Never Have I Ever, Downton Abbey, Bridgerton, Good Girls, Veronica Mars, and iZombie.