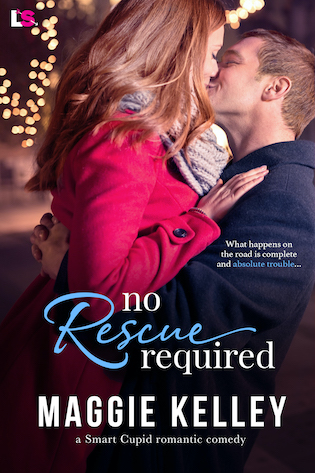 No Rescue Required
Maggie Kelley
Published by: Entangled: Amara
Publication date: November 14th 2022
Genres: Adult, Contemporary, Romance
Sports agent Ryan Callahan’s trip is a complete disaster. Not only did he fail to sign a promising young ballplayer, but now he’s stranded in a Kentucky town no bigger than a bourbon ball. His plane’s been canceled, there’s not a cab to be found, and getting back to New York City is gonna take a miracle. Like a quirky, strawberry-blonde florist with a big van and a craving for late-night, deep-fried hotdogs…

With her best friend’s wedding and her business on the line, Sabrina Hayes needs to be in New York like yesterday. But with her flight canceled and her bank account almost as empty as her gas tank, an extra passenger might just be the long-overdue lucky charm Sabrina needs…especially now that she knows he’s definitely not a serial killer disguised as a scrumptious Thor look-alike.

Somewhere between a roadside stand that serves food as fast as it serves weddings, a motel room haunted by a lovesick ghost, and a car race known as the Snowball 500, Sabrina and Ryan are about to discover that anything that can go wrong will go hilariously wrong. But even they are not prepared for what’s in store on the road ahead…

She turned on the blinker to merge, and having wrapped up his issue, Ryan slipped the phone into the center console, arranging it so she could see the directions on the screen. The simple gesture touched her heart. Other than her gram, no one had ever looked out for her, not even in a small way, and his thoughtful courtesy reminded her how concerned he’d been talking with his sister, his impulse to look out for her, the casual way he’d said love you.

Not words she’d heard much growing up. Except for Gram. Her parents weren’t big on affection, except with one another, so she had to stock up on I love you during her Kentucky summers. Gram always said kindness was in the little things—delivering a cup of coffee in the morning, offering to make supper, bringing in the newspaper. Big gestures were nice, but the small stuff made up a person’s life.

“Hey, before I forget to tell you,” he said, “I appreciate the assist with Mason Hollis. I admit I was pretty thrown by having the door shut in my face.”

She gave him a sidelong glance. “Not a guy who’s used to rejection?”

“Not really, no.” He looked over, wearing an expression that probably made the Midtown girls melt like a Kentucky snowfall. “Most of the time, the answer I get is yes.”

She raised one brow. “Of course you are.”

“Seriously?” A vague irritation flashed across his face.

“Truth is, I wasn’t prepared to go back to the Hollis place tonight, not after the ‘city slicker’ comment, but thanks to you, I’ve got a shot to sign Mason, an opportunity that seemed unlikely an hour ago.” He paused. “What can I say? There really is some magic in that southern charm of yours, so thank you. I owe you.”

She looked over briefly, touched by his acknowledgment. “You’re welcome.”

The inside of the cab grew quiet for a moment, neither having much to say—or, more accurately, not knowing what to say, considering they were fundamentally strangers. Ryan tapped his knuckles on the console and nodded toward the radio. “Not a bad song.”

“One of my favorites,” she said, appreciating Maren Morris’s lyrics about putting her car in drive, finding an escape. “You like country music—that’s a good sign.”

He gave her a look that said you’ve got to be kidding me. “No upstanding New Yorker likes country.”

“I can always sing along,” she said, glancing in his direction. “Convert you into a fan.”

“I do not wear cowboy boots.” She shook her head, chuckling. “And trust me, nothing is adorable about me singing karaoke—absolutely nothing.”

His brows lifted. “So, no road-trip serenade?”

“Maybe next time.” He shot over another one of those cool-guy smiles.

Except there’d never be a next time. Apart from the fact that he liked sports and was down for karaoke, she scarcely knew the guy, and what she did know was in opposition to the low-key life she’d chosen. He was high-end cashmere and pricey gym membership, excessively work-focused and supposedly health-conscious, and not at all her speed. He was also surprising and kind in a way she hadn’t expected when he’d come into the shop.

But no—no. She tightened her grip on the wheel. This trip was nothing more than a rideshare, and thinking about his finer qualities was just a road to nowhere.

In twelve hours, Ryan Callahan would be a memory, an impossibly gorgeous guy from the city who’d stumbled into her shop on a random Friday night, a guy along for a thirteen-hour ride, down for sharing driving time and expenses.

Nothing more, nothing less. 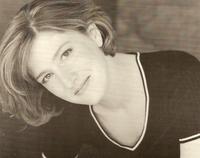 After ten years of survival, aka working, in Hollywood, this former actress and current author of sexy contemporary romance is living happily-ever-after in Pittsburgh with her longtime sweetie and their two punky kids. When not carpooling to birthday parties or testing her gourmet cooking skills by throwing a frozen pizza into the oven, Maggie daydreams about sneaking off to the Vegas or Napa, or even just the movies. A love of red wine, Italian food, and music round out her list of life’s greatest joys. Oh, and Tuesday night karaoke, totally underrated fun.