Ellen and her friends never saw this coming.

During a Twilight tour of Forks, Washington, Ellen, Sue, and Tanya rent a bungalow on Quileute land to celebrate Tanya’s sixtieth birthday. They’re having the time of their lives until strange visions make them question everything they know about the afterlife. Can the three best friends uncover the mystery of the Machiavellian spirit sharing their bungalow?

Here’s what readers are saying about this series:

“They begin a dangerous quest digging into the real history behind the Gold House. What they find will blow your mind! My heart was racing throughout this entire book. If you believe in ghosts or even if you don’t, I suggest reading by a lamp. I jumped several times as if a movie were playing inside my mind. . . . The three women in this book are wonderful. This is definitely a must-read. 5 stars for Eva! Well done!!”–Book Lover Reviews ★★★★★

“This is a real page turner. Riveting, and exciting. The characters are very well written, it’s easy to read and you won’t want to put it down.”–Southermermaid85, Amazon Reviewer ★★★★★

“This is my first experience with author Eva Pohler and I can’t believe I haven’t read anything of hers before! Loved the book and I’ll be checking out more in this series.”–The Novel Lady, Amazon Reviewer ★★★★★

Described as “Nancy Drew meets The Golden Girls,” these friends get in way over their heads as they try to bring peace to ghosts haunting their most recent flip project or vacation rental.

**The books in this series can be read in any order.

Two days later, Ellen flew with Moseby to Seattle, where she rented an SUV—a white Nissan Rogue—and drove in the dark and through the rain for three hours toward La Push. The last two hours were on winding roads that had Ellen gripping the steering wheel and clenching her teeth.

Moseby whined. He sat in a carrier strapped in the front passenger seat.

“I know, Moseby-Mo. It’s been a long car ride, but I think we’re nearly there.”

Brian had business meetings in Portland all week, and Ellen hadn’t wanted to board the dog, worried it would cause post-traumatic stress disorder. Plus, she needed him, since she was traveling without her friends, hoping to get everything ready to save Tanya’s birthday.

It was so dark and rainy in La Push when she arrived that she nearly missed the turn into the Oceanside Resort Office. She pulled in, put the rental in park, found the totem pole Dorothy had described, and, clutching her hood beneath her chin, used the phone inside the totem to telephone security.

“I’ll be right there,” a man on the other end of the line assured her.

Moments later, a black truck approached, and a police officer rolled down his window to hand her a key.

“Are you staying there alone?” he asked as she stood in the rain beside his truck. “I thought there were three of you. My paperwork shows three signatures.”

Ellen and her friends had been asked to sign, scan, and email liability waivers.

“The other two will be joining me in a couple of days.”

The officer frowned. “Are you sure that’s a good idea, staying there alone? Dorothy told you about the history of the place, didn’t she?”

“It’s up there on the highest hill,” he pointed out. “Just follow this road on up. You can’t miss it.”

“Let us know if you decide to leave early,” the officer added, handing her his card with his contact information. “The cell service is spotty out here, but you can always drive over to the totem and call me from here.”

“Will do.” Ellen read the card. “Thank you, Officer Hobucket.”

The officer waited until Ellen had returned to the SUV before he drove off. She said a prayer as she followed him from the parking area and back onto the road in the opposite direction, heading toward the beach, until she came to a fork. The road to the right went downhill and the road to the left went up, so she went left.

“This has to be it,” she said to Mo as they neared a bungalow surrounded by enormous western red cedar trees, the silhouettes of which were visible in her headlights.

She parked the Nissan Rogue and took Moseby from his carrier. With his leash attached to his collar, she walked him toward the front door. It was too dark to make out much about its features. An old porchlight illuminated the front door and wooden porch, but not much else. She couldn’t even tell what color it was painted. Maybe gray?

As she waited for Mo to do his business, she turned her face toward the ocean, but it was too dark to see. She could hear it, though, gathering in great bursts against rocks that must not be too far below. A glance to the dark sky above revealed no moon, but an ocean of stars twinkled down at her, and she felt suddenly small and nervous.

“Come on, Moseby-Mo.” She nudged her dog from the grass toward the front door. “Let’s check out the inside.”

Dorothy had warned her that it hadn’t been cleaned in years, and the stale air that greeted her when Ellen opened the door did nothing to contradict that.

Moseby whined at the stoop.

“Inside,” Ellen commanded as she blindly felt the wall for a switch.

Not finding one, she stepped further into the bungalow, making the leash taut between her and Mo, who’d remained on the threshold.

Ellen’s hand swept across a cobweb, and she gasped with surprise at the unexpected texture. Shuddering and wiping her hand against her jeans, she continued to flail around for a light switch and finally found a floor lamp when she walked right into it.

She dropped the leash by accident to steady the lamp, and Moseby scurried away.

Ellen rushed outside into the rain. “Mo! Come back here!”

Mo stood at their rental car looking back at her without any intention of minding her call.

Fortunately, he didn’t run off as she approached him and scooped him into her arms.

She fumbled for her phone, which was somewhere at the bottom of the purse draped over her shoulder. Once she found it, she turned on the flashlight app and proceeded back toward the house.

When she reached the porch, the front door, which she’d left ajar, slammed shut in her face.

“The wind is really something out here,” Ellen remarked as she reached for the knob. 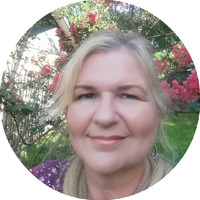 Eva Pohler is an award-winning and USA Today bestselling author of over thirty-five novels in multiple genres, including paranormal mysteries, thrillers, and young adult fantasy based on Greek mythology. Her books have been described as “addictive” and “sure to thrill”–Kirkus Reviews.