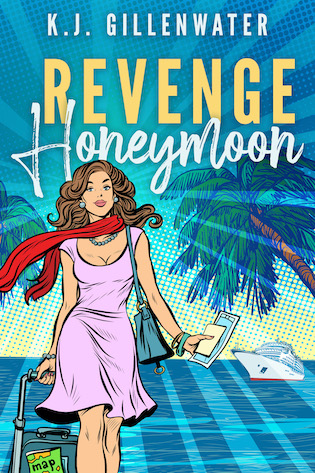 Emily Small has a big heart, a loud mouth, and a terrible taste in men. She’s used to living in her perfect best friend Ruby’s shadow – but when Ruby is left devastated at the altar, Emily becomes desperate to save her friend from heartache… and salvage their non-refundable cruise!

Emily hatches an ingenious plan to soothe Ruby’s broken heart by island-hopping together as an act of revenge. There’s only one teensy problem: the cruise is for newlyweds only. Naturally, they have a solution. They’ll pretend to be a married couple!

But their ten days of fun are about to spiral into a crazy, messy adventure that risks leaving a few hearts broken along the way – because when Emily bumps into the ship’s hot photographer, Max Keeling, she begins to wish she could rethink their arrangement. If her deception gets discovered, would they boot her off the boat? But Emily can’t keep her hands to herself, and her cruise fling could bring everything crashing down.

How can she support her best friend at the worst moment in her life while pursuing an out-of-her-league guy in the Caribbean? And can she somehow find a way to have the best of both worlds?

As a hilarious, sexy, and heartwarming read that strikes the perfect balance between feel-good emotions and laugh-out-loud humor, Revenge Honeymoon is a fun and memorable romantic comedy that you won’t be able to put down. Grab your copy today!

Note: This book was originally released on Kindle Vella in serialized format. This version has been edited with an additional epilogue added.

“That was Tyler,” Emily gulped. Her mouth so dry she wished she had a bucketful of water to drink. “He’s not coming.” Her voice dropped to a bare whisper.

The cousins gasped and clutched one another in horror.

The make-up artist, who had been waiting to do final touch-ups, packed up her case in a flash and squeaked out of the room without a word.

Ruby’s eyes widened, her mouth formed an ‘o,’ and her body vibrated a fine tremor. “Oh no, was he in an accident? I told him not to drive himself. I’ve read so many stories about brides and grooms getting in accidents on the way to the church. Nerves, they said. Should I go to him? Where is he? Was he driving his father’s car or the rental? I hope he wasn’t driving the rental. We have to make it to our suite at the Hilton tonight, and I really don’t want to take an Uber. Or have my father drive. Oh, that would be so embarrassing.”

“Ruby.” Emily grasped her friend’s arm, the fine Mikado silk cool under her fingers. A long-sleeved dress for a late fall wedding maybe was too warm for the Tampa location, but it had been so gorgeous on her friend’s slender body there had been no other choice at the bridal boutique. “He’s calling off the wedding.”

Why did she have to be the one who picked up the phone?

One of the cousins burst into tears.

Ruby stood stock still in the middle of the bride’s dressing room. “But—”

Rhonda Madison Evers entered wearing a royal blue mother-of-the-bride dress covered in sequins. “My darling. The make-up artist told me the news. How could that man be so cruel?” She curved her arms around her only daughter.

“Mom, I don’t understand. How could he not be coming?” Ruby crumpled to the floor.

“You’ll crush your dress!” Mrs. Evers gasped and knelt beside her. She yanked at her daughter’s arm as if her will alone would lift up the one-hundred-twenty-five-pound woman and her ten pounds of underskirts and heavy fabric. “We can still return it.”

“No, we can’t. It’s been altered.” The bride spoke in a monotone.

“I need to talk to him.” The bride snapped her fingers at Emily. “Get Tyler on the phone. I will just demand that he come.”

Emily gulped and bit at her lower lip, then got up the courage to tell her best friend since grade school the worst thing a best friend could say. “Tyler doesn’t want to get married. Do you really want to force a man to marry you, Rubes?”

“But he promised me. He gave me this ring.” Ruby held out her hand for the cousins, her mother, Emily, and now the florist who’d arrived with her wedding bouquet. A gorgeous pear-shaped 2 ½ carat diamond decorated her left ring finger. “Would he have given me this ring if he didn’t want to marry me?”

“He doesn’t want to marry you, Rubes.” Emily knelt and put an arm around her friend. The bride sagged against her.

The florist quietly set the bridal bouquet on a chair and scrambled for the door.

Emily led Ruby to an empty chair and her mother sat beside her. “He’s an awful man. A terrible, mean, awful man. Who would do that to my little girl?” Mrs. Evers took her daughter by the hand and gripped it tightly.

“Ow, mother, that hurts.” Ruby pulled her hand out of her mother’s grasp and began to nibble on her freshly manicured nails. “What do we do about the guests?”

“Your father is telling them now,” Mrs. Evers reassured her.

“What will we do about the reception?” Ruby pulled the veil out of her hair.

“We’re inviting everyone to meet us over there,” her mother answered. “We’ve already paid for the hall, the food, the entertainment. We might as well have a party, don’t you think, darling?”

“What will we do about the honeymoon?” Ruby kicked off her satin heels and rubbed her toes.

“Well, I guess you’ll have to cancel,” sighed Mrs. Evers. “Maybe they’ll give you credit.”

And that’s when the revenge honeymoon took shape. That very moment. And Emily Small’s life would never be the same. 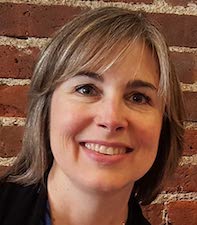 K. J. Gillenwater has a B.A. in English and Spanish from Valparaiso University and an M.A. in Latin American Studies from University of California, Santa Barbara. She worked as a Russian linguist in the U.S. Navy, spending time at the National Security Agency doing secret things. After six years of service, she ended up as a technical writer in the software industry. She has lived all over the U.S. and currently resides in Wyoming with her family where she runs her own business writing government proposals and squeezes in fiction writing when she can. In the winter she likes to ski and snowshoe; in the summer she likes to garden with her husband, take walks with her dog, and explore the Big Horn Mountains. She has written multiple books and plans on writing more.