I am so excited that KINGDOM OF BROKEN IRON by Mallory McCartney is available now and that I get to share the news!

This blitz also includes a giveaway for a $10 Amazon GC’s courtesy of Mallory & Rockstar Book Tours.

So if you’d like a chance to win, check out the giveaway info below. 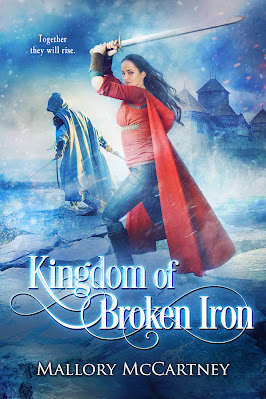 “Together they will rise.”

Something sinister is sweeping across Kiero, and war threatens to rip apart the remains of Black Dawn Rebellion.

Distraught by the decisions she made while in the Draken Mountains with Adair, Emory Fae, Queen of Kiero, is hiding a deadly secret, and now, Emory is seeking aid from Marquis Maher, King of the Shattered
Isles, in the looming war.

With Brokk by her side, they search for answers and aid from the Shattered Isles, a country that has remained protected from Adair’s wrath across the Black Sea. While there, Emory will learn the weight of what it means to be Queen, but what will she sacrifice to save the ones she loves?

Since the Academy fell and the Black Dawn rebellion scattered, Brokk Foster’s past and the truth about his lineage has come to light. Brokk and his newly found immortal fey warriors are skeptical of Marquis and his terms to a new alliance. Being torn between love and Brokk’s loyalty to the rebellion, he will have to decide whether to remain true to his cause or follow a destiny he never wanted.

Together, can Emory and Brokk make an alliance in time to return to Kiero and aid the rebels?

Nyx Astire, new clan leader to the raiders in the Risco Desert, has lost everything. With no word on if the town of Pentharrow has survived under Azarius Walsh’s command, Nyx tries to rally the Dust Clan and prepare them to ally with any remaining members of the Black Dawn Rebellion. But tradition and her past throws Nyx into a dynamic ruling. Will she do anything to ensure Kiero’s survival from her new point of power?

Kingdom of Broken Iron is the third installment in the bestselling Black Dawn series. Can friendship, love, and fellowship defy an enemy Kiero has never seen before?

Grab the first 2 books in the series now! 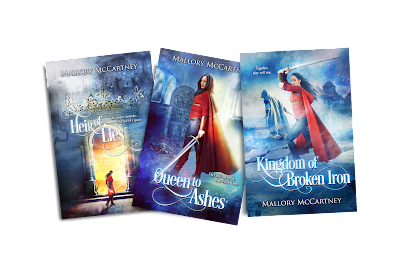 Dipping
his index finger in the spattering of ruby blood on the throne’s arm, Declan
licked it off the  tip of his finger. Eyes closing, the Dark King could
hear the previous man’s screams, and that fear  was still laced in his
blood. Each prisoner that was brought to him amused him with their will to live
and to fight back.

As
if they ever had a chance.

The
throne of bones he sat in was cool beneath him. Declan uncrossed and crossed
his legs,  glaring at the guards that were his puppets. Consuming souls
was intoxicating and usually made his  life extremely easy in what he
hoped to accomplish.

No
one could stop him.

Adair
Stratton had been conditioned as his vessel for years by the Oilean and with
the Book of  Old’s magic in the boy.

After
years of meddling and consuming dark energy and magic in Daer, like his father,
Declan was not a man anymore. He was raw power and rage; he was destruction.
But only in a vessel who  could contain him. The only other power that
could sustain him would be a naithe warrior from  Nehmai. But that city
had died long ago, along with its elitist mentality. Without it, his essence
was a  whisper, a shadow.

He
chewed his lower lip, and annoyance flickered at the years of planning to prove
to himself  and to his father’s memory that Declan had been more than
what his father had said: A disappointment of a son and a waste of ability.

“Another,”
he said in a lazy drawl.

What
weak man could eat the souls of people? Could steal their magic? Pushing the
thoughts  down, Declan steeled himself against the whispers of his dead
father in his mind. He, Declan, would  destroy Kiero until it was nothing
more than a dying star, blinking out of existence. Oh, how he would  enjoy
watching it burn so brightly.

The
guards swiftly complied, entities of his dark magic bowing to his every will,
every command.  Their silver eyes were empty of emotion; they had no
recognition of the world around them. These  vessels were for his
practical uses and nothing more.

Drumming
his fingers, he heard the screams coming down the hallway. The guards brought
in  the man, bloodied, sweating, frantic.

Declan
stood, the Oilean materializing beside him, bowing in one motion.

“Our
King.” Their voices were quiet purrs.

Flicking
his gaze to them, he demanded, “If you have nothing new to report, you have one
second  to get out of my sight.”

“Emory
Fae and Brokk Foster have seemingly . . . disappeared from Kiero.”

“Then
I suggest you look harder.” Declan walked across the smooth black marble toward
the next prisoner. The man paled, whispering intangible sentences while shaking
his head. It only made  the experience that much more pleasurable.

No
words came out of the man’s mouth, only choking hiccups.

Declan
tutted. “Why must everything be a surprise?”

Declan’s
hand connected with the man’s wrist, and the surge of raw ability filled every
crevice of  his new body. It expanded into him, easing his weakness,
sating his hunger. He sighed in pleasure and  dropped the man—now nothing
more than a corpse—blood trickling from his mouth.

Rolling
his shoulders, Declan addressed the guards nonchalantly. “Dispose of the body
with the  rest.” Fire sprang to his fingertips, the silver flames
mesmerizing. “By far, one of my favorites,” he  mused, more to himself.

Bringing
his attention back to the assassins, Declan situated himself on his throne once
again,  inspecting his fingernails. “Now, I suggest that if you can’t find
them, you get creative. Draw them  out. Set the whole world on fire if you
must. Just get Emory Fae and Brokk Foster back. I will be  ready,
but I need what the girl stole from me.”

Part
of the dark power that Adair had running through his veins.

The
sisters bowed their heads, saying nothing.

“It
is all worthless unless we get her back. I’m fragmented, broken. The power of
the Book of  Old has always been the key to my plan. But the power must be
whole. This strength is only temporary.  In a few hours’ time, I
will be nothing more than smoke and ash again.”

He
sized them up, silver fire dancing along his forearms. “I suggest you fix your
mistakes.” Bowing lowly once more, they disappeared in a plume of smoke.

Cracking
his neck, Declan sized up the cavernous room and its unnecessary luxury. He
would  make fine work of Kiero. His army would sweep over the land,
upturning every hidden rock and secret  that lay underneath. He began to
pace, fire crackling from his hands as it licked up his skin. Staring at  the
embers drifting to the ground, he fantasized about how exactly he would welcome
the queen and  prince back to his kingdom.

His
head tilted back, and he stared up at the open ceiling. The serenade of screams
floated up to  him from far below; the humans he hadn’t drained yet
awaited their fate. Fear was such an effective  weapon, and it was
spreading as his presence became more known.

Declan
held on to the fact that until he was at full strength, he would savor watching
each prisoner  be brought up to him. He would experience ecstasy while
feeding off their abilities. He would soon drain this world like he did
Daer. 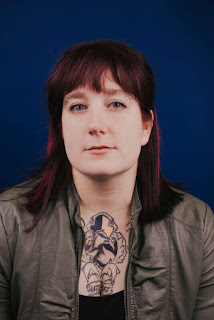 Mallory McCartney currently lives in Sarnia, Ontario
with her husband, their two dachshunds Link and Leonard and two sphynx cats
Luna and Legolas.

When she isn’t working on her next novel or reading, she can be found
daydreaming about fantasy worlds and hiking.

One lucky winner will receive a $10
Amazon Gift Card, International.