I am so excited that ASK THE GIRL by Kim Bartosch is available now and that I get to share the news!

This blitz also includes a giveaway for a $10 Amazon GC’s courtesy of Kim & Rockstar Book Tours. So if you’d like a chance to win, check out the giveaway info below. 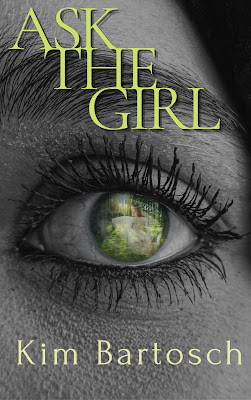 Nobody believes sixteen-year-old Lila Sadler, who was diagnosed with bipolar disorder.

Nobody believes that Lila’s sister Rose is possessed by the ghost of Katy Watkins. As Rose’s health worsens each day, the only way to save her is to uncover the awful truth of Katy’s death so many years ago.

Not even Katy. Unaware that she was murdered, Katy has wandered for a hundred years in complete ignorance, until the day she meets Rose and Lila.

Together Lila, Rose, and Katy must confront their demons to escape this hell. But will they be able to escape? Can they forgive the
unforgivable?

THE EARTHY AROMA of decay nestles in her nose. She
spits out a mouthful of soil. Her teeth are gritty and  she grinds her jaw
as she digs in the dirt with a stick.  Digging deep so the message will
remain until next  time. The stick breaks.

“Damn!” She throws the stick. Her companion, a  black
dog with a white star patch, sniffs the air then  growls.

Katy stops. “Coyote, are they here?”

The dog whines, stands, and begins to pace. The  leaves
whisper as a cool breeze passes through. High pitched screeches and the click
of gnashing teeth echo  in the distance.

Katy’s heart drops in her chest. She doesn’t have  much
time. She claws at the ground; her nail tears off  and blood mixes with
the dirt, but she does not stop.

She needs to finish. She needs to make sure the
message remains so that it will be here for her next  time. So she will
find it and remember.

Coyote barks. Katy digs. The wind howls. It whips
around her. The loose dirt stings her face and eyes.  Tears stream down
and she chokes back a sob.

Time freezes into silence. Nothing moves.

Katy stops digging and looks up.

A loud thump shakes the ground, followed by a low
watery growl. The smell of rotten eggs linger. “Come, Coyote!” Katy’s foot
slips in the loose soil as  she pulls herself up and runs. Coyote bolts
ahead. The creature chases her and the dog.

It flies over her message but does not disturb
the soil.

I WAS TOLD every person experiences three deaths.   The
first is when the body stops working. The second is when you’re sent to your
grave. The third is in the future, when the last person  who remembers you
dies, and speaks your name no  more.

My father has died twice but still lives on in my
heart. But this doesn’t comfort me.

I pressed my forehead against the cold glass as  I
stared out the car window. Trees and buildings  whizzed by, sending a wave
of nausea through my  body. I inhaled deeply, pushing it back along with
a  deep ache of loss. No more late-night movies. No more  corny jokes
about how I’m not allowed to date. No  more childhood home as the car
pulled onward to our  new lives in Missouri with my aunt and uncle.

A furry black blur dashed out from behind a  billboard
sign. “Mom, watch out!”

The car lurched as Mom and Rose jumped from my
outburst. “Lila, what is it?”

I waited for the thump, but instead only heard the
steady rhythm of tires on pavement. I whirled around,  expecting to find a
flattened animal out the back window—but nothing. “Didn’t you see it?”

“I don’t see anything.” Rose turned back around.  Her
head was shaking as she nestled her earbuds into  her ears. She thinks I’m
making things up, again. I  know she thinks I’m being the dramatic,
unreliable  older sister. The sister she can’t count on, who stirs
up trouble and starts fires. But I didn’t start the fire. No one believes me
that I didn’t do it. I was just at the  wrong place at the wrong time. I
tried to explain that  to Mom and Rose, but they didn’t believe me. But
it’s  been that way ever since I was diagnosed with bipolar
disorder. When people know, they treat you differently,  even your
family.

Rose turned up her music, blocking me out. Mom  gripped
the steering wheel so tight her knuckles  were white as sun-bleached
driftwood. She mumbled  to herself, sighed, and clicked on the car’s
blinker.  It ticked loudly, announcing our descent onto the
Parkville exit.

The car turned down Main Street, lined with old
Western-style brick buildings. Ancient homes perched  on the bluffs and
cliffs above the town. On the other  side, a muddy, choppy river flowed a
few hundred feet from the road.

“This place hasn’t changed much,” Mom said. Rose squirmed in
the front seat as she stared wide eyed out her window, her phone held up as
always,  recording a video. “I can’t wait to do my documentary.  I
found out that this town has a ghost!”

“Well, there’s a lot of history in this town. That’s
for sure.” Mom drove the car slowly up Main Street.  “Too much history,”
she mumbled. Mom caught her  reflection in the rearview mirror and fixed
her hair frantically. She had the same blonde hair as I did, but  her eyes
were a brighter green.

Aunt Theresa and Uncle John are nice but a little  different.
They’re complete opposites—my aunt, a true  Midwest lady who hugs, kisses
everyone, and makes the  best baked goods ever; my uncle, a rough,
tattooed, bald  biker who tells long stories about his good old days.
We  only saw them once a year, which was enough for me.  Now I have
to figure out how to live with them.

We drove through downtown Parkville and entered  a
subdivision of colonial-type homes sitting high on  steep hills above the
road. Tall oaks and maple trees  shaded the street and sidewalk where
families in  shorts and T-shirts walked their dogs, rode bikes, and
pushed baby strollers. Eventually the houses became  fewer and Mom turned
onto a small gravel road with  a sign that read, “Cooper’s Inn.” The road
wound up,  and our small car groaned as it climbed the steep
hillside. The trees closed in around the driveway but  soon opened up to a
grand three-story Victorian home  with a broad wraparound porch and four
spiraling  pillars, much like Juliet’s tower.

“Wow!” Rose was gazing out of her window. The  house
rested on a bluff overlooking the Missouri River,  rolling hills, bluffs,
and some of the town. “I always  love the view here.”

My aunt waited at the back door with a warm  smile and
waved as we pulled up. Her long dark  hair sprinkled with gray blew into
her face when she  stepped outside. She wiped her hands on an apron
dotted with flour and dough before tucking her hair behind her ears. Mom and
Rose went to greet her,  but I walked to the back of the car to get my bags
to  avoid the hugs and pinched cheeks. A flash of bright light appeared
out of the corner of my eye. Near the  forest, small globes of light
floated around the trees. I squinted to get a closer look.

“Yoo-hoo, Liiilaaa!” My aunt walked toward me,  arms
wide open. My heart dropped and my chest  tightened, bubbling up against
the urge to scream or  cry uncontrollably, but I knew I had to get this
part  over. So I closed my eyes and let my aunt drown me in  her
arms.

It will be fine, Lila. 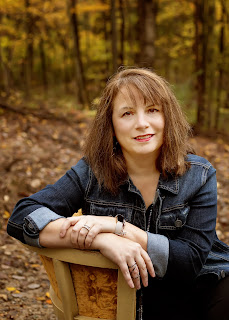 Kim is a young adult writer of
paranormal mysteries and thrillers. She is fond of ghost stories and has
experienced many hauntings during several paranormal investigations. She has contributed
many articles regarding travel, hauntings, and more on various sites. Kim has
been on several ghost hunts across the U.S. with her sister. She photographed a
ghost at the Crescent Hotel in Eureka Springs, Arkansas.

As an advocate for Autism and
Bipolar Disorder, Kim offers her support to many charities and programs, such
as Joshua Center and
Depression and Bipolar Support Alliance (DBSA). Kim feels
there aren’t enough programs for mental disabilities. Her goal is to give as
much help to set up these organizations for success so individuals, such as her
autistic son and bipolar sister, will have the support they need.

Kim is an avid member of the
Society of Children Book Writers & illustrators (SCBWI.org) contributing her time to many
events and conferences.