I am thrilled to be hosting a spot on the THE FORTUNA COIN by Karen Ann Hopkins Blog Tour hosted by Rockstar Book Tours. Check out my post and make sure to enter the giveaway! 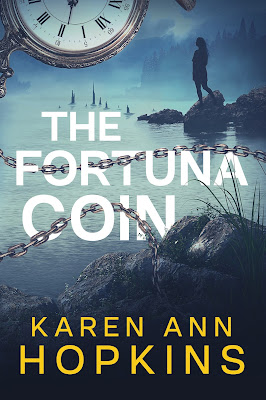 Read for FREE With
A Kindle Unlimited Membership!

“A must-read. Not the typical book you would expect from Karen Ann Hopkins if you’ve
read any of her Amish series’ but she absolutely nailed this one!! This book jumps right in on page one and makes you not want to put it down even for a second all the way to the end and I loved that! Would absolutely read it again and definitely recommend it to anyone who loves a good romance thriller with some Sci-fi elements in there too.” Cassandra, Book Sirens Reviewer

Wendy Catalano, a newly remarried mother of four, finds herself, her husband and her children, murder victims of her ex-husband. A family heirloom takes her back in time to the beginning of her relationship with her eventual killer where she’s given the magical opportunity to change the future and stop her
family’s tragic ending. But she isn’t aware that she’s reliving a tortured life. With only glimpses of the future, Wendy struggles to survive present day, unaware that a bloody and unforgiving destiny awaits her.

The Fortuna Coin is a haunting psychological thriller about second chances…but will the truth really set Wendy free?

Before I get into my review of The Fortuna Coin, I just quickly have to thank Rockstar Book Tours for letting me be a part of this book tour and for providing an egalley book for me to read for my review today.

Do you remember many years ago when it seemed like time-traveling books were all the rage? I was instantly sucked into that genre and read so many books, I think I over-read and soon stopped reading them until now. The Fortuna Coin is a time-traveling book (which by the way makes me want to look some up so I can read that genre again) and it’s filled with suspense and a little romance.

I should say right away that the first few chapters and then here and there in the book could be a trigger warning for some readers.

The book begins in 2017 with our main character, Wendy (who has just remarried) having fun at her wedding with her husband, Ben, and her four children. Things seem to be going well for the newlyweds until her ex calls her out of the blue. You know that this is not a good thing especially if said ex hasn’t been in touch for almost two years.

At this point, I was curious about her ex, Josh, and what he was like and what would have driven him to do what he did to his ex and his kids.

Wendy wakes up confused and disoriented. What just happened begins to fade and she is a 21-year-old in a bar. Little does Wendy know that she has been given a second chance at her life and this is because she has the Fortuna Coin that her father gave her. She didn’t realize how much power this coin had. She quickly begins to have feelings of deja vu and memories of her future. What will Wendy do when she meets her soulmate? Will she follow her heart or will she go the route of Josh?

I think The Fortuna Coin was the perfect book for this time of year and especially on the day that I read it because it was raining and cool. Plus it was a pretty quick read for me because once I started I had a hard time putting it down. I was instantly sucked in from pretty much the first page. It’s been a little while since that has happened and I love when it does.

Karen Ann Hopkins is new to me author and I definitely want to read more of her books especially if the writing is anything like this one. 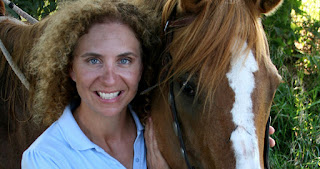 Karen Ann Hopkins resides in northern Kentucky with her family on a farm that boasts a menagerie of horses, goats, peacocks, chickens, ducks, rabbits, dogs, and cats. Karen’s main job is homeschooling the kids, but she finds time to give riding lessons, coach a youth equestrian drill team, and of course, write.

She was inspired to create her first book, Temptation, by the Amish community she lived in. The experiential knowledge she gained through her interactions with her neighbors drove the story of the star-crossed lovers, Rose and Noah.

Their story continues in Belonging, where their families and cultures threaten to tear them apart, and with Forever and Deception, where we find out once and for all if love is enough for them.

Lamb to the Slaughter, the first book in Serenity’s Plain Secrets, is Karen’s newest Amish endeavor, opening up the darker, grittier and more secretive lives of Amish society. It’s a story about the intertwining lives of three unlikely people in an Indiana Amish Community and the devastating results when a rebellious teenage girl is found shot to death in a cornfield during the harvest.

Serenity Adams is the newly elected young sheriff in the rural town of Blood Rock, and besides dealing with the threatening behavior of her predecessor, she now has a dead Amish girl on her plate.  At first glance, the case seems obvious. The poor girl was probably accidently shot during hunting season, but when the elders of the Amish community, and even the girl’s parents, react with uncaring subdued behavior, Serenity becomes suspicious. As she delves deeper into the secretive community that she grew up beside, she discovers a gruesome crime from the past that may very well be related to the Amish girl’s shooting. Serenity enlists the help of the handsome bad-boy building contractor, Daniel Bachman. He left the Amish when he was nineteen and has his own dark reasons to
help the spunky sheriff solve the crime that the family and friends who shunned him are trying desperately to cover up.

Serenity’s persistence leads her to a stunning discovery that not only threatens to destroy her blossoming romance with Daniel, but may even take her life in the end.

Karen’s YA paranormal/urban fantasy series, the Wings of War, is an epic story about Ember, whose normal life ends abruptly
when her parents are killed and she discovers she’s a descendent of angels. Still coping with her strange powers, Ember finds herself — and her heart — in the middle of a centuries-old war in this “compulsively readable” novel (Kirkus Reviews).

Karen grew up about a mile from Lake Ontario in Upstate New York.  She was bitten by the horse bug at the age of five, and after diligently taking riding lessons for several years, was rewarded with her first horse at the age of eleven.  The feisty horse’s name was Lady, a Quarter Horse-Thoroughbred cross, who became Karen’s steadfast companion.  Through the years, the constant force in her
life was horses.  Eventually, she found her place as a riding instructor herself.

Before accepting her fate in the barnyard, she worked a short stint as a paralegal, traveled abroad, and guided tourists on horseback riding tours in the Smoky Mountains of Tennessee. Karen is currently working on her bestselling Amish mystery series, Serenity’s Plain Secrets, along with the YA paranormal/fantasy series, the Wings of War. Karen is also excited to announce there will be more
books in the Temptation series.

5 winners will win a finished copy of THE FORTUNA COIN, US Only.