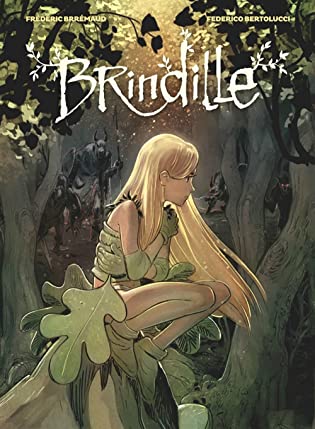 ABOUT
A frail young girl flees a roaring forest fire in the middle of the night desperately taking refuge in a cave where she quickly loses consciousness. She wakes up in a strange, tiny village populated by fairy-like creatures. Her hosts seem intrigued by the sparkles of light that seem to surround her. The village chieftain explains that one of their hunters found her passed out in the forest and brought her back here for treatment. He asks who she is, but she remembers nothing except for a wall and flames. The chief is baffled by her tale as there has not been any fire in the forest lately, and yet the young woman does indeed show signs of burns. Somewhat recovered and dressed in woodland clothes made by the villagers, the young lady asks to meet the hunter who found her in the forest. She asks her savior to take her to where he found her, hoping that seeing the place will restore her memory. But Meliss refuses -- the rules of the village say that only hunters can enter the forest, and all of the sparkles surrounding the girl would catch the eyes of predators living in these woods...

This past week I attended virtually SLJ Teen Live and it was so much fun. I was able to discover a few new books such as this graphic novel and quite a few other graphic novels that I have shared so far and will share in the future.

I have to say that Brindille is fantastic. The illustrations are so pretty. This was another graphic novel that I read in one sitting. I was definitely intrigued from the very beginning when a mysterious girl is thrust from a forest fire and seeks refuge in a cave. She has no memory of who she is or what has happened to her. When she does wake up she is in a tiny village. The villagers are fairy-like creatures. This mysterious girl is always surrounded by sparkling lights.

The chief of the village is baffled by her story of how she got there because there haven’t been any forest fires but her burns and scratches say otherwise. Once she is recovered she asks to meet the hunter who found her because she is hoping he will show her where he found her in hopes of figuring things out. He refuses because the rules are only hunters can enter the forest and that it’s too dangerous especially considering she has an orb of sparkling lights around her.

When he refuses she takes it upon herself to travel into the forest. From there it’s one thing after another. Will we find out who this mysterious girl is and how she got to that village?

After reading this I hope there is a second graphic novel coming out. I will be keeping a lookout for it.