I am so excited that IN THE SHADOWS OF THE CITIES by Laurel Solorzano is available now and that I get to share the news!

This blitz also includes a giveaway for some AWESOME prizes courtesy of Laurel, & Rockstar Book Tours. So if you’d like a chance to win, check out the giveaway info
below. 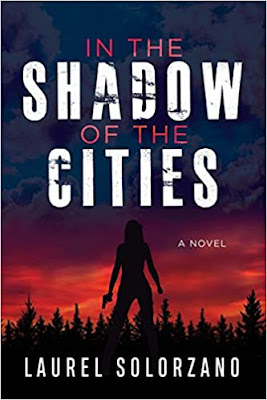 Title: IN THE SHADOWS OF THE CITIES

Scarlett would never kill her best friend, perhaps a Citizen if the situation called for
it, but never Rhys. There are quite a few rules in the training center, but a few are the kind that are never broken.

1. Greens are not sent into Cities without officially being promoted to Blue.

2. Blues don’t kill each other.

So why is Scarlett being sent into a City without the proper training? And why does a bizarre, elderly male say Scarlett will kill Rhys? In the Shadow of the Cities details Scarlett’s life in the training center before she is pulled unexpectedly into City life. Without the proper training, she is confused about these things called “families” and why the Citizens aren’t grateful that she is keeping them safe.

In this dystopian novel, In the Shadow of the Cities, the story is told not from a Citizen’s point of view but from a Guard’s. Why do the guards seem to
tirelessly obey the government? How can they gun down Citizens mercilessly?

Find out as you follow Scarlett on her journey into the Cities.

Scarlett stared out the window of her history class.

The Blue droned on at the front of the room, but Scarlett hated the story of the Government, not that she would dare say as much aloud. Blah, blah, blah. Citizens couldn’t be trusted to share. Blah, blah, blah. They had been organized according to abilities and were allowed to live their best lives as long as they followed the rules. Blah, blah, blah.

Scarlett had never seen one of these Citizens, but she had been shown many pictures. They looked just like her, except for the fact they weren’t as intelligent. But that wasn’t always something you could see.

Scarlett shifted to a more comfortable position in her chair and dared a glance over her shoulder at Jaylin. Jaylin was staring intently at the Blue as though they hadn’t been told this same story before, as though she might absorb some detail that she had missed during another account.

Scarlett sighed softly as her mind turned to what she would do when she was finished with her classes for the day. She had exactly two hours of free time before dinner. Free time was the only chance she would have to see Rhys because males and females weren’t often allowed to mingle.

A piece of paper landed on her desk, and Scarlett’s eyes flew up. The Blue was already moving on to the next desk. A quiz? On what?

They hadn’t learned anything ew. Scarlett waited for the signal to turn her paper over and quickly scanned the questions. Then, rolling her eyes at the quick bout of anxiety, she raced through the quiz, circling the correct answers.

All of her other classes moved on to new material after a week or two. But his- tory class—it was always the same. At least she was guaranteed a good grade. What Scarlett couldn’t wait for was the “Life in the Cities” class. But she wouldn’t be able to take that one until she was a Blue, and who knew when that would be. She had been a Green for three years, but she could continue to be a Green for an- other five if she wasn’t able to meet the right goals. She could potentially remain a Green forever, but she knew that wasn’t a real possibility, not with her dedication to the training.

A grating beep signaled the end of class, and Scarlett placed her book carefully into her satchel. Everyone remained silent until they exited the classroom, then Jaylin grabbed Scarlett’s arm.

“Female! You have got to come with me. Miya and I are planning on partic- ipating in the Optional Fitness Program, and you have to join us.”

Scarlett nodded, trying to match Jaylin’s enthusiasm for the program. Scarlett enjoyed working out, and she often spent time exercising during her free hours. But there was something about having another program in lieu of choosing her own exercises that made Scarlett wary of joining.

“Thanks, Jaylin, but Rhys and I are going to practice in the shooting range today.”

“You can practice tomorrow. The program is only four days a week.”

Scarlett and Jaylin were old friends. They had been promoted to Green on the same day and had nervously learned to navigate the new waters together.

Scarlett knew her friend wouldn’t be hurt if she turned her down.

“I think I need more aim training than ab training,” Scarlett said. They had reached the end of the hall. “I’ll see you at dinner time.”

“Fine, female, abandon me then. Miya and I will talk bad about you behind your back.”

Scarlett laughed. “Just don’t wear out your lips from using them too much.”

Scarlett hurried toward the front door, which led to the gate that separated the males’ and females’ training centers. There was only one way to pass from one to the other, and you had to be approved by the Blue guarding it. It was a fair process. Scarlett had never been denied entry.

She stepped up to the guard and presented her badge to be scanned. The guard nodded as the time flashed up on the board along with Scarlett’s information. She entered the males’ training compound, heading around the building rather than through it. Scarlett found most males maintained a horrendous odor, and it was best to avoid them in concentrated numbers when possible.

Scarlett entered the males’ shooting range, scanning the pods for the familiar dark curls. Pod 3. The pod where they had met.

Scarlett checked out a longer rifle and headed toward the pod, adjusting her safety gear. She waited for Rhys to lower his pistol and bob his head slightly to let her know he knew she was waiting to enter.

Carefully, Scarlett slipped the sound-proof glass door open then closed. She stood beside Rhys, taking her position on the other shooter’s mark. Rhys didn’t hogwash her with boring questions of how her classes were. He already knew. He took the same classes, just in the males’ training center.

Scarlett raised her rifle. “I don’t have my gun of choice. I thought I would go with something I hadn’t practiced with for a while.”

“All the better,” Rhys responded, aiming and firing five shots in quick succes- sion. Four hit the middle of the target. The other one missed by two centimeters.

“Why? Because you’re assured of a win? Is that why you want to compete? Be- cause you can’t normally provide a challenge for me?”

Rhys smiled as he waited for her to take her turn. Scarlett hesitated, but she wasn’t one to back down from a challenge. She turned toward the target and took her time aiming, the bulky weapon unfamiliar in her grip.

Finally, she took her shots, pausing between each one.

“Yes, two. Thank you. My eyes are working very well.”

Rhys laughed a little as he lifted his safety goggles and propped them on the top of his head. “Hey, I couldn’t be sure after those shots. Besides, you agreed to it. I didn’t force you into anything.”

“Sure,” Scarlett said, copying his move with the goggles. “The ‘peer pressure’ came on pretty strong.” Scarlett looked toward the booth where she had checked out the rifle, wondering what had made her grab it. She hated being beaten.

Rhys laughed and turned toward the target once more. They had various competitions and “trick shots” they could try, but Scarlett had something else on her mind. She gazed through the pod toward the east. She couldn’t see the Mound from here. The dorm’s tall frame was too close, but that didn’t mean it wasn’t on her mind.

Scarlett shook her head “I have a better idea,” she said, even as her stomach twisted into knots. “I’m ready to get over my fear.”

“Of heights?” Rhys knew her well. He followed her gaze, then laughed, rubbing his coffee-colored hands together in enjoyment. “What are you going to do? Scale the dorm?”

Scarlett laughed. “Uh . . . no.”  “Then what? There’s nothing else taller than that, so if you don’t scale the dorm building, then you’re letting me down.”

“There’s the Mound,” Scarlett said, referring to the large thing that lurked just outside the fence, just outside the area they were allowed to go. No one quite knew what it was made of, but it looked possible to scale.

Rhys gave her an incredulous look. “You’re not serious. When?”

Scarlett shrugged, the nervousness making her feel weak. She turned to the tar- get and took a few shots to calm her nerves. They were near the bullseye, close enough with the unfamiliar weapon that she felt assured again.

Scarlett nodded. “Yes. The only question is . . . are you coming with me?”

Rhys cocked an eyebrow. “I never miss out on an adventure, but . . . I also don’t break the rules. The rules are there for a reason.”

The corner of Scarlett’s mouth curved up just a bit. “What rule would we be breaking?”

Rhys shook his head. “I don’t know. How about never leaving the training cen- ter walls? Or the one about staying in bed between lights out and morning wake up? Do you want me to go on?”

Scarlett sighed. “Those are Level 1 infractions; it’s not like you’ve never broken the rules before.”

“Yeah, but two Level 1 infractions?” Rhys sighed and inspected the pistol care- fully. “I’ll do it. I mean, for you. But I know I’m close to being promoted. I know I’m going to be a Blue soon, and when that happens, none of this. I can’t risk being stuck at the training center for the rest of my career. I want to be in a City.”

Scarlett nodded. “Okay, tonight. I’ll see you an hour after lights out where the fences meet.”

Rhys considered her idea for a minute. “Okay, I’ll be there.” The seriousness of their plan weighed on them as they continued shooting.

Scarlett couldn’t back down. She had been considering the idea for weeks, and now seemed like the time to do it. After all, Mrs. said you should conquer all fears before entering a City. And that meant facing them. Now that the plan was in place, Scarlett felt nervous, like maybe she shouldn’t have suggested it, like maybe they would be better waiting one more night. She glanced askew at Rhys. She didn’t dare say anything to him now. He would never let her live it down. So, tonight it would be. 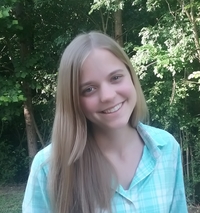 Laurel Solorzano has enjoyed writing since she was in middle school, exchanging manuscripts for years with her best friend. After traveling the globe for a time, Laurel set her goal to become a published
author. As she works teaching English and Spanish,  she  writes stories  in her  free  time.
Laurel  currently  lives in  Raleigh,  North Carolina  with her husband, Yader.

3 winners will receive an eBook of IN THE SHADOWS OF THE CITIES (gifted via amazon), International.