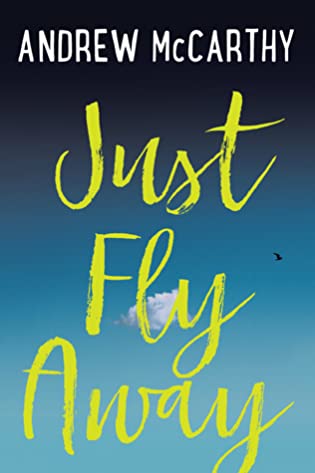 “Ever wish that you could just fly away?”
When fifteen-year-old Lucy Willows discovers that her father has a child from a brief affair, a eight-year-old boy who lives in her own suburban New Jersey town, she begins to question everything she thinks she knows about her home and her life. How could Lucy’s father have betrayed the entire family? How could her mother forgive him? And why isn’t her sister rocked by the news the way Lucy is?
As her father’s secret becomes her own, Lucy grows more and more isolated from her friends, her family, and even her boyfriend, Simon, the one person she thought understood her. When Lucy escapes to Maine, the home of her mysteriously estranged grandfather, she finally begins to get to the bottom of her family’s secrets and lies.

I have to first begin this review by saying that I am a huge Andrew McCarthy fan (he is my all-time celebrity crush) and I was beyond thrilled when I got to meet him at BEA 2013 when he was talking about his audiobook The Longest Way Home. This was one of the panels I really wanted to attend. He was super sweet and friendly and was gracious enough to take a picture with me.

Okay, enough gushing and onto my review of Just Fly Away. I had to buy (June 13, 2017) and read right away when I got it and since the original review I might have reread this a few times since then.

This is his first young adult novel.

I really wanted to savor this book but I just couldn’t I literally read this in one sitting.

Lucy is a fifteen-year-old girl who overhears a conversation that her mother and father are having about an affair he had nine years ago and if that isn’t devastating she finds out she also has a half-brother who is eight years old and living in the same town as them. Her father no longer has contact with the mother of the child.

Lucy is torn up because it seems like everyone has gotten over the affair. Her mother is still with her father, her sister basically couldn’t care less and this is tearing Lucy up inside. She is furious with her father and I think she has every right to be mad. Lucy tries to talk to her friends and her boyfriend but everyone seems to be okay and what is done is done. But how can it be?

I really enjoyed reading the book the first and many times since. I would definitely read Andrew’s next book if one was to come out. Who am I kidding, I will read anything Andrew writes.