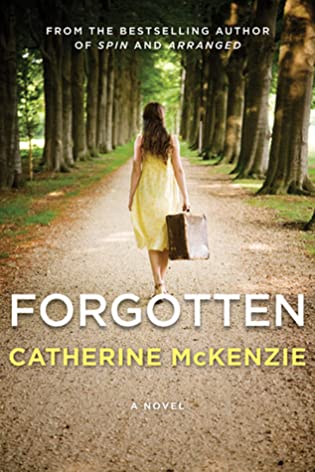 Forgotten by Catherine McKenzie
Published by HarperCollins Canada on May 1, 2012
Pages: 367
Goodreads

Emma Tupper is a dedicated lawyer with a bright future. But when she takes a month-long leave of absence to go on an African vacation, she ends up facing unexpected consequences. After she falls ill and spends six months trapped in a remote village thanks to a devastating earthquake, Emma returns home to discover that her friends, boyfriend, and colleagues thought she was dead and that her life has moved on without her.
As she struggles to recreate her old life, throwing herself into solving a big case for a client and trying to reclaim her beloved apartment from the handsome photographer who’s taken over her lease, everyone around her thinks she should take the opportunity to change. But is she willing to sacrifice the job, relationships and everything else she worked so hard to build?
In FORGOTTEN, Catherine McKenzie tweaks a classic tale of discovering who we really are when everything that brings meaning to our lives is lost.

It’s so funny as I look back on my review from 2012 I can actually remember where I was when I read this, I was on the train on my way to NYC to attend my second Book Expo event and I had packed this book to read on the train. I definitely took my time reading this and managed to space it out so that I finished it just before arriving in NYC.

Emma Tupper is a young lawyer on the fast track to becoming a partner in the law firm she works in. Things are going well until her mother gets ills and dies. Emma’s world is rocked and she is forced to make a tough decision, continue working or accept the gift her mother has left her.

Emma’s mother has left Emma a plane ticket to Africa, a place her mother has always wanted to go to but never got the chance. When she approaches the law firm with this they are not very happy and discourage her from leaving because she is just what the firm needs. In the end, Emma decides to go on this month-long journey. It’s what her mother would have wanted.

Not long into her trip Emma gets sick on the tour (so much so that she can’t continue) and is left behind in a little remote village to recuperate. Then as she is getting better and is trying to get back home they are hit with an earthquake. Her little one-month adventure ends up turning into a six-month adventure.

She is finally able to get back home but soon realizes that her bank account is frozen and that is because she was presumed dead since she never returned on her return date and the tour company never reported that Emma was sick so when the village was struck with the earthquake they all presumed Emma died in that. If that doesn’t make things worse her apartment has been rented out to another person (Dominic), all her friends (even her boyfriend) have moved on and all that she had owned is now gone.  Life as Emma knows it has changed drastically. Will she be able to get back on track?

If you were given the chance to live your life over again would you do it the same way or make changes? Emma wants her old life back (even her boyfriend) and tries hard to do that but eventually realizes that perhaps she should go with the changes people around her suggest. I know as I was reading this I wanted Emma to see Dominic in a new way and not just as a friend.

I am always fascinated with these kinds of storylines because I always wonder if I was given the chance to do a do-over, would I? I guess it would depend, would you?