My name is Robyn Echols. Zina Abbott is the pen I use for my historical novels. I’m a member of Women Writing the West and Western Writers of America. I currently live with my husband in California’s central valley near the “Gateway to Yosemite.”I love to read, quilt, work with digital images on my photo editing program, and work on my own family history.

I am a blogger. In addition to my own blog, I blog for several group blogs including the Sweet Americana Sweethearts blog, which I started and administer.

The daughter of a
Georgia plantation owner, Diantha Ames was raised and educated to be a lady.
Surviving the Civil War as a child, her family, in a desperate, but ultimately
unsuccessful bid to save the property of both her father and her uncle,
arranges a marriage between her and her first cousin. Although not a love match,
she and Eugene were amiable. As information about her husband comes to light
after his death in the Gold King Mine disaster that took so many lives in
Wildcat Ridge, she is left with her husband’s hotel and postmaster position to
fill—and a lot of questions. 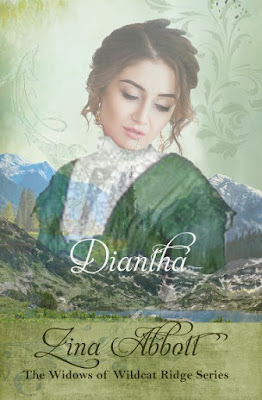 With Diantha’s
former laundress gone, she hires Hilaina Dowd, whose family hails from the
mountains of Appalachia. Hilaina loyally stays with her mother who wishes to
live out her life in Wildcat Ridge and be buried next to her husband who died
in the mine disaster.
Henry “Hank”
Cauley is branded a failure after refusing to be part of his father’s Salt Lake
City brick-making business and then losing his stationary and book store
business. To bury him far away, his brother and conniving sister-on-law use
their political influence with the territorial Congressional representative to
award him the postmaster position in Wildcat Ridge. He arrives in town to take
over the position starting the first of September only to discover the
postmistress, Diantha, knows nothing about the change, and is not relieved she
no longer is obligated to fill this position originally awarded to her deceased
husband. Finding himself surrounded by those loyal to the soft-spoken, Southern
lady, is he destined to also be a failure in Wildcat Ridge?
Buckley “Buck”
Kramer, wrangler on the Grassy Fork Ranch in Colorado, has not been totally
satisfied with his lot ever since the trip he took to Wildcat Ridge earlier in
the summer with his boss and best friend now he sees the happiness of family
life the two men enjoy after they brought back wives. When two trail-worn young
brothers stumble onto the ranch looking for a meal and permanent jobs, but are
told with winter coming on there is only room for one, Buck insists on leaving
in order to keep the brothers together. Is Buck really dissatisfied with his
job on the ranch, or is this an excuse to return to Wildcat Ridge and the woman
he has not been able to get out of his mind?
Diantha, Book 14,
is a stand-alone novel. However, you might enjoy it best by reading all the
books in the series, The Widows of Wildcat Ridge. Also, my other book in the
series, Nissa, Book 3, was written to
be a duet with Diantha—a series
within a series. You might also enjoy reading Nissa if you have not already done so.

Snippet:
“One of the men killed was the
postmaster. He wasn’t a miner, but he took part in the rescue attempt that
ended up claiming the lives of a lot of merchants and businessmen in town. With
enough people still there to justify a post office, and the position now open,
the government is looking for someone who is willing to move to such a remote
location to fill it. Since it is a small office without mail delivery every day
with only a minimal monthly salary, it means you would need to live frugally on
the income provided. I…” Louis glanced across the table at his wife. “We
thought it would be a good opportunity for you, since you do not seem to wish a
future in the brick business.”
Hank
fought down the surge of excitement welling up within him. This position held
great possibilities. It would bring in a steady source of income—money over
which he had complete control—for a job that would leave him enough freedom to
pursue his own desired career. He could find a small retail space and once
again open his shop. He could use the leftover inventory he had crated up and
stacked in both his room and a back wall of a storeroom at the brickyard. If
the post office building was big enough, he could sell his inventory there.
Most importantly, he would have time to finish his novel he had almost
completed before he had been forced out of his shop and into a job working for
his brother. No, he would do that before he left.
A
quick glance at the smirk of satisfaction on Della’s face told him she was the
mastermind behind him being offered a position far away from Salt Lake
City—completely disassociated from the business she wanted to eventually go to
her son, Louis Junior, rather than to Hank. For once, he felt grateful he had
not indulged in his usual hair-trigger tendency to act—often over-react—to a
situation. It would never do to let Della know he welcomed the prospect.