Like flowers denied water, people are wilting under the emperor’s tyranny.

Rose will not rest until the Gardener is dead. But there are bigger battles to fight, and Rayce—leader of the rebellion and the only man Rose has ever loved—believes their best chance at winning the war is to join forces with her sworn enemy.

Saving innocent people is more important than her quest for revenge. But their new ally can’t be trusted—and he knows her darkest secret. One betrayal could leave the war and Rayce’s life hanging in the balance, and Rose will need to make the ultimate sacrifice to save them all.

Amber Mitchell was born and raised in a small town in Florida. After briefly escaping small town life by attending the University of South Florida where she earned her degree in Creative Writing, she decided to ditch traffic jams and move back to her hometown. There she writes Young Adult novels, usually with a bit of magic in them, rolls D20s with her friends on Thursday nights and enjoys hanging out with her husband and four cats. Her other job involves crafting cardstock in to 3D art and has allowed her to travel all over the US v

ending at comic conventions which has only increased her love for fantasy and fandoms. She is represented by Nikki Terpilowski of Holloway Literature

Before I begin my review I quickly have to thank Chapter by Chapter for allowing me to be on the blog tour for this and to Entangled Teen for sending me an aARC of the book to read for my review today.

One of the advantage of being a part of blog tours is hearing about books that you might not normally hear about on your own and this was the case for me once again. I am brand new to this series (thankfully its only the 2nd book so it makes catching up rather easy) and to Amber Mitchell’s work.

I have noticed since taking part in blog tours that I have been open to reading all kinds of books that peak my interest and even genres that I don’t tend to read. This series is a young adult fantasy.

I absolutely love the titles and the covers. They are just so pretty. Don’t you think? I definitely think I would love to own the physical copies of the books.

Since this basically picks up where Garden of Thorns left off I won’t get to deep into my review because I don’t want to spoil it for you if you want to read this new exciting series.

The main character Rose is set to take down the Gardener with the help of her trusty rebels. They are determined to ruin any plans the Emperor  might have. Rose has come to the realization that she has to join forces with her arch enemy if they have any hopes of that happening.

There is a love interest, Rayce in the book and a lot of the time it just seemed like they both were playing the cat and mouse game with each other but you could definitely feel the tension between them and I think that’s what made it so intriquing for me to want to see where it was heading and where it will still head.

Rose has definitely grown from book one and it was nice to see that transition happen. I love watching this happen and I should point out that the book is told in her point of view which is always nice because you always want to know more from the character that we did.

This was definitely one of those books I had a hard time to put down because I wanted and needed to know what was going to happen at all times. It was a fun, fast paced sitting on the end of your seat kind of read.

I definitely want to read the next book in this series and hope its not too long of wait.

Other books in the series: 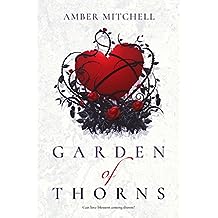