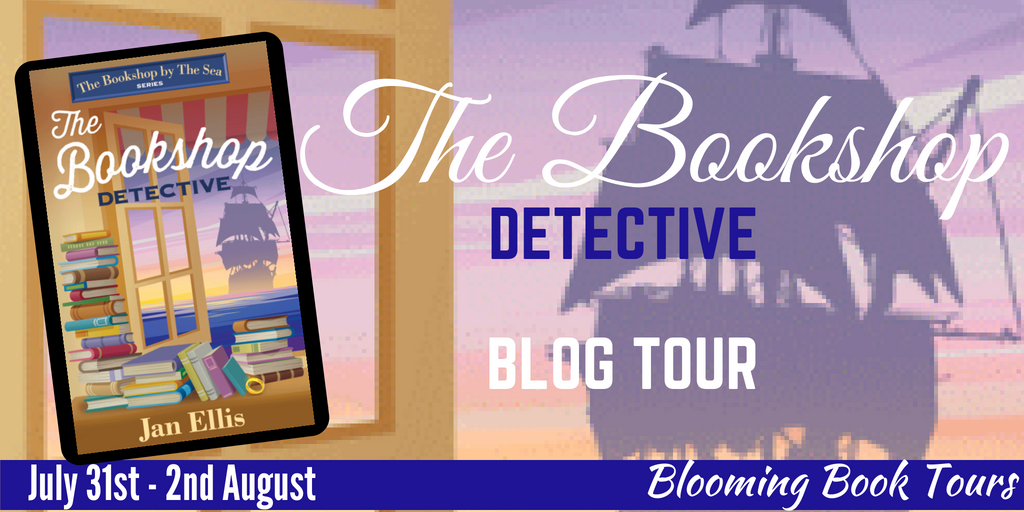 When a ghost ship is spotted on the horizon one spring evening, bookseller Eleanor Mace decides to investigate the myths and legends of Combemouth, the seaside town where she runs The Reading Room. As Eleanor digs deeper into the town’s history, she becomes intrigued by a Victorian crime report and is determined to find out what happened to a boy at the centre the case – one with intriguing links to the present.

As Eleanor begins to uncover the truth – aided by the vicar but somewhat stalled by the local librarian – she has an unexpected challenge on her own horizon. Daniel – her husband of six months – is determined that they give up their separate homes and find a new place together. But Eleanor adores her cottage by the sea and resists, guaranteeing that things turn a little frosty as the summer begins.

A celebrity book launch, an exploding dress and some salsa-dancing pensioners make this a mystery with a difference.

Jan Ellis began writing fiction by accident in 2013. Until then, she had led a blameless life as a publisher, editor and historian of early modern Spain. She fell into fiction when a digital publisher approached her to write a history book, then made the mistake of mentioning women’s fiction, which sounded much more fun.

In 2017, her four e-novellas were published in paperback by Waverley Books who also commissioned a brand-new title, The Bookshop Detective.

Jan describes her books as romcom/mystery with the emphasis firmly on family, friendship and humour. She specialises in small-town settings, with realistic characters who range in age from young teens to 80-somethings.

As well as being an author, Jan continues to work at the heart of the book trade. Jan Ellis is a nom-de-plume.

Instagram (even if I don’t know how it works…)

I chaired a ‘romcom’ panel at WestonLitFest this spring (and have been invited back for 2019) and have also spoken at Tiverton Literary Festival. Thanks to The Bookshop Detective, I was part of a crime and mystery evening at The Big Green Bookshop in North London with best-selling authors Lisa Cutts, Simon Booker and William Shaw. In October 2018, I will again be talking about the book at the Yeovil Literary Festival.

I’m a member of ‘Stellar Scribes‘ and together we speak at libraries and run creative writing workshops. I’ve also appeared in the local press and spoken on the radio about my books which, at their core, are about family, friendship and the humour inherent in everyday life.

My paperbacks are widely available from libraries, and Waterstones currently stock them in five of their South West branches. I’ve also been lucky enough to earn shelf space on the shelves of independent bookshops across the country.

When I’m not being Jan Ellis, I do sales and marketing for part of the Booksellers Association of the UK and Ireland (BA) and I’m a non-fiction publisher by trade, which means that I’ve been attending the London and Frankfurt Book Fairs for more years than I care to remember…

An Unexpected Affair and A Summer of Surprises (no. 1 in The Bookshop by the Sea series)

French Kisses and A London Affair

The  Bookshop  Detective by  Jan Ellis – Extract  for Cindy’s Love of Books.

Six  months  into their  marriage, bookseller  Eleanor and her husband  Daniel have still  not moved  in together.  Dan’s ex-­‐wife  Freya is always ready  to stir things up…

Extract  from Chapter  8 A Blast from  the Past

Jogging  down the  hill the thought  nagged at him that  his first marriage had  failed and  his second  was not going  as smoothly as he  would have wished. How  committed  was Eleanor  if she didn’t  want to set up  home with him?

He had  reached the  end of the path  where it joined the  main street when he bumped  into Freya  looking cool  and elegant in  a pale blue dress,  a pair of outsize sunglasses  perched on her  head.

Freya  arched a  slender eyebrow  in a subtle gesture  that managed to convey  amusement,  curiosity and  a tiny bit of  disdain. “And where  is home these days?”

Daniel  stood with  his hands on  his hips panting  slightly. He nodded  towards the  sea front  and the bright  red door of his  house. It was known  as The Widows’ House  because  of the two  women who had  lived there before  him. “You know perfectly  well where  I live,” he  said, immediately  angry with himself  for falling into  Freya’s  trap.

The  infuriating  woman always  knew how to push  his buttons for maximum  effect.  “My wife’s  name is Eleanor.”

“Of  course  it is. Silly  me.” Freya smiled.  “It’s odd, but I could  have sworn I saw you  coming  out of the  bookshop cottage  with bags of clothes  the other morning.  Don’t  tell me  you still  haven’t persuaded  Eleanor to move in  with you.” She laughed  outright.  “Or has your  snoring grown so  bad she makes you  sleep half a mile  away?”

Daniel  could feel  the pressure  building at the  base of his skull,  partly as a result  of pounding  down the road  and partly from  being put on the  spot. It felt as though  he’d been  caught out,  even though he  and Eleanor made  no secret of their  unconventional  living arrangements.

“Well,  it’s none  of your damn  business. Now, if  you don’t mind, I’ve  got work to  do.”  And with  that he turned  and ran towards his  house, furious with himself  for  losing  his temper  when they both  knew that Freya only  had to ask their daughter  Emily what  Daniel’s living  arrangements were.  Freya had played him  for  a fool,  yet again.

Once  at the  house, he  stomped angrily  around the kitchen  ruing the day he had  let her  take their  very expensive  coffee maker. He  had bought the damn  thing  for her  birthday only  a few months before  their marriage broke up  and, yes, he  could  quite easily  afford to buy  a new one but it  rankled nonetheless.

He made  himself a  cup of nasty  instant coffee and  headed for the shower  where  he hoped  a blast of  cold water would  help push Freya’s face  from his mind. But  it was  not to be.  Even though they  ran into each other  fairly regularly, Dan’s  heart  always missed  a beat when he  saw Freya’s familiar  figure in the distance,  a leather  folder of  architect’s plans  under one arm.  It had  not been  his idea to  divorce and the  pain of dividing up  ‘stuff’ had been hard,  but nowhere  near as hard  as wrenching Freya  from his heart. She  was his first  love and  her abandonment  had left him hurt  and angry.

When  they separated,  Daniel told her to  take whatever she wanted  from the cliff-­‐top  house they had  designed together,  a decision he regretted  when she emptied  the kitchen  of all their  best knives and  gadgets.

Freya  really was  the most infuriating  woman Daniel knew, yet  he couldn’t help  feeling  proud of  what she’d  achieved professionally.  Since their separation, she  had gone  from strength  to strength and  he had almost grown  used to seeing her  name in  the tabloids  as the ‘wacky’  architect responsible  for the latest startling  development.

Daniel  picked up  the mug of  cold coffee and  swished it angrily  down the sink.

Pushing  the wet hair  from his face he  examined his face in  the bathroom mirror.

“When  will you  ever get the  hang of women?”  he asked his reflection.  The face in the  mirror  had no answer.