Last week was March Break for my son and I managed to get him into four library activities last week. Our library is really good about organizing events for kids during spring break, the summer reading program, and basically any time of the year be it holidays or weekends. 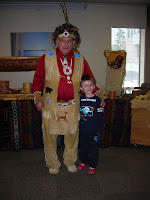 Michael started the week off by listening to Chief Topleaf (He went to Michael’s kindergarten last year) talk about Indians. Chief Topleaf is a Mohawk Indian from our area.
It was only a hour but it was very well done. Chief Topleaf is a great speaker. Kids asked him about the paint that they wear and he said he doesn’t wear it because it burns his skin and he told the kids that when you see a Indian wearing yellow and red it means a friend for life. He spoke about his name and what it was like to be a Indian 500 years ago. 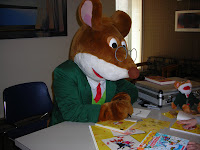 I think the highlight of the week was on Tuesday afternoon when Michael finally got to meet Geronimo Stilton. I actually got the chance to see him in October but at the time Michael didn’t want to go but after seeing my pictures and video he wanted to go and he was really happy to hear that the library was going to bring him over Spring break.
Michael admitted that he found this activity hard because it was 100% in French and he is only learning french. He did say it was alot of fun. It was an added bonus that he was able to get his books signed. 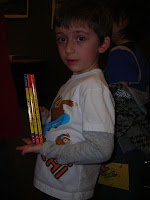 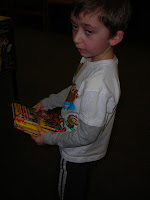 The first picture is of Michael waiting to get books 3, 4 and 5 signed. Then when everyone was done he sneaked back to get 6-7-12 and a Xmas book signed. Plus he nabbed two signed postcards for himself. 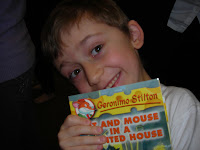 He was so happy to get his books signed as you can see by the picture. 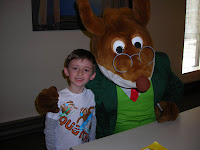 Of course no author event is complete without a picture with the author. We also got to meet Linda’s Better With Books sister. She came in to get her books signed. It was really nice to finally meet her. 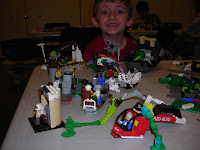 Another activity that was planned at the library was Lego Club. They just started this this year and they were so overwhelmed that they had to open a second time which was great because Michael was on the waiting list. The theme this meeting was Space and you can see all the things he managed to make in 2 hours. He loves playing with lego.
Thursday we had nothing and Friday was a Wii game which Michael said was okay.
That was our spring break how was yours? Did you have it yet?
copyright 2010, Cindy (Cindy’s Love Of Books)
If you are reading this on a blog or website other than Cindy’s Love Of Books or via a feedreader, this content has been stolen and used without permission.