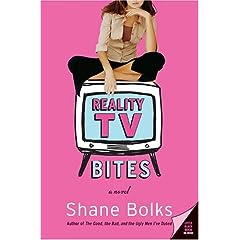 The book is a woman named Allison. She is a reality tv junkie. She works in an Interior designing firm. Her boss signs the company up for a reality tv show. The show is sorta like the Iron Chef. Its two teams (them and a japanese firm).

They have 8 hours to decorate a room in a house. They have to do it in a bold design and use unorthodox materials (the first one is really funny-won’t say what it is in case anyone wants to read the book).

Then one of the producers (Nicolo) tries to seduce Allison. She finds out he is a prince. A real prince. He gives and shows her how the rich and famous live. There is this other guy in Allison life. His name is Dave. He is as equally good looking. But they have a love hate relationship. He shows her how the common people live with beer and basketball games. It ends up that Allison broke the contract with the reality show cause she was dating the producer and he makes her live a living hell to say the least. She is hounded by the press day and night cause the story was leaked thanks to Nicolo. She wonders if she will ever get her life back. She fights all the way though.

Will she get the Prince in the end?