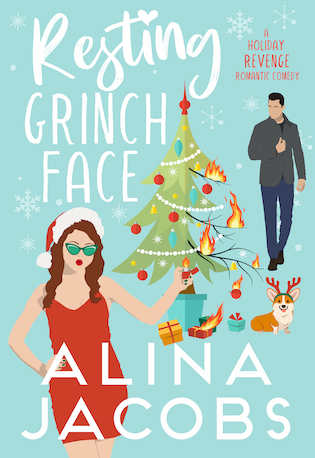 Resting Grinch Face
Alina Jacobs
Publication date: November 17th 2022
Genres: Adult, Contemporary, Holiday, RomanceI might not be able to ruin his life, but I will ruin his Christmas.
Yeah, I’m totally a grinch. But I come by it honestly.
Because of Oliver Frost, I flamed out at Harvard in the most humiliating way possible.
Now I’m back in my small town—just in time to suffer through a display of small-town Christmas cheer so festive it will make you puke your eggnog. But who cares about being home for the holidays when you live with your family like a loser and have to share one bathroom with seven other people?

I plan to spend my Christmas purgatory being tsked at by elderly residents and passive aggressively prodded by my mom’s friends about what I plan to do with my life.

I don’t know, Deborah, work in the Christmas market and get screamed at by tourists because I didn’t put enough sprinkles on their little brats’ coffees? Seriously, who gives five-year-olds that much caffeine anyway?!

See? Like I said. A grinch.
I hate Christmas.
I set a nativity scene on fire.
Got in a fistfight with an elf—I lost, by the way.
And threw a vat of Snowman Surprise all over Oliver. Don’t ask. Small-town Christmas insanity.
Sleigh what? Oliver is here???
The man who humiliated me and ruined my life?

Momma’s gonna have herself a very merry Christmas revenge.
Swapping the salt and sugar so his Christmas cookies are ruined? Be still, my shriveled little heart.
Spying on him so I can gather recon to ruin his holidate? Damn, I forgot how ripped his chest was.
Sneaking down his chimney to steal all the presents under his tree? Amateur hour.
Until I get caught…

Guess I’m spending Christmas in jail.
But when he sees I’m not wearing a bra under my ugly Christmas sweater, Oliver smiles like Santa has come early.
Crap! I knew I should have worn my good underwear.

Hold on to your stockings because the eggnog is spicy and mostly booze. This is a fuck-second-chances, Santa-stalker, holiday-revenge romantic comedy. Featuring Christmas-hating heroines with poor decision-making skills, ripped guys who will leave a very large package under your tree, and adorable corgis dressed up as reindeer, this standalone book has a happily ever after, guaranteed!

I slid like a squirrel straddling the roof peak, scooting along the ridgeline to the massive brick fireplace. I pried the round ceramic top off and stuck my head inside.

The Victorians liked their fireplaces.

While my parents’ wood-burning fire was more of a stovepipe, this house had been built to hold a massive fire.

I swung my feet over and shimmied into the chimney. Below me, Max must have figured out what was up because he was barking, the noise echoing up the chimney shaft.

“Dang, I can’t believe I fit,” I marveled. The cold air whipped my face, and I had a moment of clarity.

“Maybe this was a bridge too far,” I said and tried to hoist myself back up.

The chimney rim was slick with ice. My hand slipped. Then I fell down into the sooty black tube.

I stopped abruptly, my teeth knocking together.

I was stuck in the chimney, my arms wedged up above my head. Every time I let out a breath I slid farther down. My skirt was wedged under my boobs, and my sweater was wrapped around my head and neck.

A pair of strong arms wrapped around my soot-covered thighs.

In any other scenario, I would have been really put out that Oliver was finally touching me only after I had flaked on working out the past year and developed a layer of winter flab. But I just wanted to be free. It was difficult to breathe.

“Save me,” I forced myself to whisper.

“Shit,” Oliver said, giving a solid tug on my legs.

I wedged down farther.

“I think you’re stuck in there.” His hands disappeared.

His hand was back, his thumb stroking me reassuringly on my ankle.

“Don’t worry. I’m going to call the fire department. We’ll probably have to dismantle the chimney. I’m sure my neighbors will complain to me about it.” I heard the eye roll in his voice. Then his phone emitted beeps.

I kicked my feet. “Don’t you dare, Oliver Frost. Don’t you dare call the fire department. My mother will find out. I’ll be the talk of the town for years. Decades. It will be on my tombstone.”

“I can’t leave you here,” he said, voice echoing up the shaft.

“Oh, yes you can. I insist. I’ll be dead and done rotting in about three weeks. Then we can all just pretend this never happened.”

Oh God. I had a horrible thought.

He can probably see straight up my crotch.

“Please,” I begged. “My life is shit. Please just try pulling me out one more time?”

“It literally will,” I shrieked with my remaining breath.

Oliver muttered something that sounded like “God save me from this woman.”

“Fine,” he grumbled, moving the logs and the metal grate out of the way. “I’m giving this one shot. Then we’re going to host the fire department for the second time in as many days.”

After a rustling of fabric, his large hands slid up my bare legs.

His bare arms circled my waist, and I squawked as he wrapped them around my bare torso, connecting my body with his.

I could feel his bare chest against my thighs.

His head was somewhere in crotch vicinity, and he squeezed me tight.

Maybe I could just tell him to eat me out and then die happy.

Oliver gave a sharp hard tug. My sweater slipped up.

He adjusted his grasp and pulled, grunting hard.

He gave one more strong tug. My sweater ripped, and then I was free, tumbling down in a heap of ash and yarn on top of him.

He was covered in black soot. It was all over his pale skin, turning his hair a dark gray and making his eyes a startlingly bright blue.

“See,” I said, spreading my arms. “I knew you could do it. And you wanted to call the fire department.”

He didn’t say a word. He was staring at me, or more specifically my boobs. 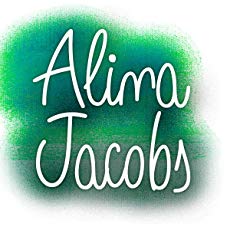 If you like steamy romantic comedies with a creative streak, then I’m your girl!

Architect by day, writer by night, I love matcha green tea, chocolate, and books! So many books…