I am thrilled to be hosting a spot on the WELCOME TO DWEEB CLUB by Betsy Uhrig Blog Tour hosted by Rockstar Book Tours. Check out my post and make sure to enter the giveaway! 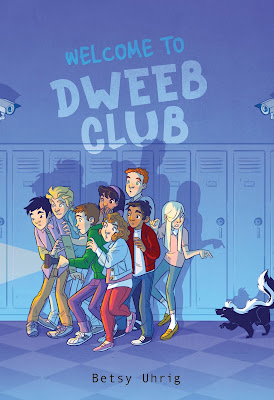 What if a school club changed your life forever?

In the second week of seventh grade, Jason Sloan signs up for the brand-new HAIR Club. He and his friends have no idea what it’s about, but since they’re the first to sign up they figure they’ll be in charge in no time. The club turns out to be super weird: using fancy new equipment donated by a mysterious benefactor, the members are supposed to monitor school security footage. Their first assignment: find out what is stealing the cafeteria’s croutons.

Instead of the expected dark cafeteria, the computers show the club members something else entirely: actual footage of themselves as high school seniors, five years in the future! What on earth could be happening? Is it some kind of time warp, or alternate reality? Or is it just an un-funny prank? As they scramble to solve the mystery, they can’t help but notice something else—none of them like what they see five years from now. Is there any way to change the future—and their fates?

Before I begin my review I just quickly want to thank Rockstar Book Tours for letting me take part in this book tour and to Margaret K. McElderry Books/ Simon & Schuster Children’s for sending me an eGalley of the book so that I could read and review it.

Would you join a school club that you knew nothing about?   That’s exactly what Jason and Glamourous Steve do on the first day of grade 7. I should say Galmoursous Steve convinces Jason to sign up for H.A.I.R club. They have no idea what kind of club it is but Steve looks at the bigger picture of it being a club and they can control it. Jason knows that if Steve’s name is there other kid’s names will be too.

To Jason’s amazement, ten kids signed up and that includes Jason and Steve along with Nikhil, Harriet, Andrew, Sonia, Laura, Vincent, and two other kids (who end up leaving when they thought this club wasn’t actually about hair). They are all 7th graders.

H.A.I.R is a brand new club to the school that no one really knows anything about, even the club advisor Ms. Grossman has no idea what it’s about. It’s only when she reads the backstory that you find out what it is. It appears that an anonymous successful entrepreneur has offered the services of his company to install a state-of-the-art security system to the school, with one stipulation and that stipulation is that the members are to take charge of the security system.

You are probably saying the same thing as me and that is what kind of security company would put students in charge of it? And should the students have access to all that information? Why is the principle even allowing kids to be behind this? The group is tasked with basically keeping on eye on everyone and report security issues.

This is pretty much where I instantly became hooked and needed to find out more about this and perhaps more about what the club and this security system are about.

The club is hit with their first case and must discover who has been stealing the cafateria’s croutons stash. When they go and check past security footage they soon discover something weird and a little creepy. Its reather unbelievable when they spot themselves in various spots in the cafateria. They soon realize they look different. They begin to think that the footage is meshing in with other footage. But soon realize that thats not the case they are viewing footage from 5 years in the future! How is that possible? The group soon discovers that they aren’t liking what they see and decide to try and change so that the future will change for them.

Finding this hard to believe they decide to scoop at the school at midnight and so discover that there is indeed someone stealing the croutons and its not what they expected. Can the group figure out what is really happening with what they saw?

This was definitely a fun read. I pretty much breezed through this in an afternoon. I think kids would get a kick out of this. Its  funny with a little mystery and adventure to it. 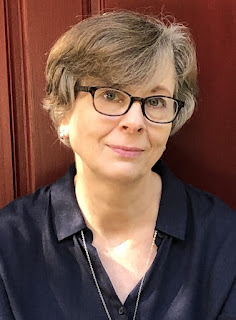 Betsy Uhrig was born and raised in Greater Boston, where she lives with her family and way more books than you are picturing. She graduated from Smith College with a degree in English and has
worked in publishing ever since. She writes books for children instead of doing things that aren’t as fun. Betsy is the author of Double the Danger and Zero Zucchini and Welcome to Dweeb Club. Visit her at BetsyUhrig.com for more information about her books and her cats.

3 winners will win a finished copy of WELCOME TO DWEEB CLUB, US Only.