It’s just my luck that the magical dragons I found would be three asshole shifters. The trade value of dragons just went up too. And when I mention selling at least one of the men to cover my investment, they throw little tantrums like I asked them to give their souls or something.

Ungrateful little creatures are what they are.

I have my own problems. My own secrets. These men are not what I need in my life right now. To top it off, they’re on the hunt for a dangerous Mage.

This is a Reverse Harem series containing M/M themes. Recommended for readers 18 and over.

I quickly have to thank Rockstar Book Tour for allowing me to be a part of the blog tour for the Taming today. I was graciously provided with a eARC of the book to read for my review today.

Before beginning my review I just have to make a quick comment on the cover of the book and how pretty it is. If I walked by this on a bookstore shelf I would definitely turn back to look at it and pick it up to read.

This was a super quick read for me and I have to say that I really enjoyed it.

Taming is the first book in the To Tame A Shifter series. The second book in the series is called Claiming and it will be released November 13, 2018.  I will have to pick it up because I really enjoyed this book and curious to see where this storyline is going. 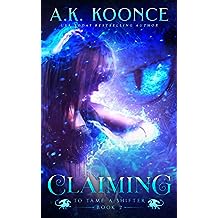 This is my first time reading anything by A.K. Koonce and I have to say if this book is anything like that rest of her books I need to start reading them soon. I was instantly sucked into the world from the first word to the very last.

The main character is Arlow and she is a mage who is on the run from her ex boyfriend who is hunting her down. At first we don’t know what she is running from and why but as the story progress we soon find out. Arlow lives in a world where magic is forbidden. Arlow has taken on the role as an animal trainer because she seems to get along with various animals then people. She tames and sells magical animals and is always on the hunt for rare ones which she knows will bring in more money.

Upon a recent visit to her blind mage friend she discovers her burying three objects in the ground. curiosity gets the better of her and she goes to dig up the three objects. She soon discovers that they are three huge eggs so she decides to take them home because she knows that these could fetch some really good money to the right buyer which just happens to be the king. Arlow needs to make this a quick sale and get a way before its too late.

As she gets these eggs to hatch she discovers that they are three beautiful dragons but what she doesn’t know is that these three dragons (Kain, Rime, and Chaos)  are actually shifters who were hired by a demon to hunt for this mage and what those dragons don’t know is that its Arlow. What will they do when they discover the truth?

This definitely ended with a cliff hanger and I am curious to see where this goes.