This is my stop during the blog tour for The Girl on Camera by Morgan Dun-Campbell. This blog tour is organized by Lola’s Blog Tours. The blog tour runs from 6 till 26 August. See the tour schedule here. 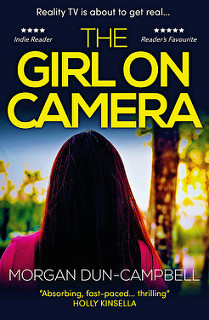 Blurb:
Reality TV is about to get real…

“Are you ready to win the heart of the nation? Compete with seven other contestants for the cash prize? Change your life forever?”

Twenty-six-year old Rory Stevens is thrilled to be selected as one of eight contestants for new reality show: The Retreat.

However, on the second day of filming – during a televised broadcast from the show’s host – all power shuts off with no explanation: leaving the contestants, quite literally, in the dark.

Completely stranded, it is now up to Rory and her seven companions to figure out what is happening.

And then one of them disappears…

For fans of Naomi Alderman, Dave Eggers and John Marrs.

I quickly have to thank Lola’s Blog Tour for allowing me to be a part of this tour and for sending me a copy of the book to read.

You might not know this about me but in real life I love watching reality tv. Everything from the Amazing Race to Big Brother which I am currently watching the US version and Celebrity Big Brother from the UK online and I honestly have to say that the CBB is so much better. It just started so I am only 3 episodes in and its so much different from the US version. Kristie Alley is actually one of the contestants on this.

Anyways back to my review.

The Girl on Camera is a reality based book that has contestants auditioning to be a part of the show. They have no clue what the show is about but once you get into the book its really hard to put down. At first I wasn’t quite sure what was going on, if it was actually real or if it was a part of the show.

Our main character Rory its fed up with her mother who is constantly telling her what to do and basically how to do it and a basically boring boyfriend. Deciding that enough is enough Rory decides she needs to take back control of her life and put her foot down and the first step is breaking up with her boyfriend and then  to audition for the show. She is scared and nervous but figures what does she have to lose. Weeks after the audition Rory begins to realize that she wasn’t selected and decides that perhaps going back to school is what she is meant to do and become and adult like her mother wants her to.

Then out of the blue she gets a call from the show, she was selected as one of the 8 contestants. She is to arrive at a hotel to be debriefed. She will be locked away from society for 3 weeks and live with 7 complete strangers. They aren’t allowed to say anything as secrecy is a must for the success of the show.

Once everyone is locked into The Retreat the house guest all start to get to know each other and you know before long that drama and conflict is bound to happen but in this case it happens really suddenly and unexpected that brings a new twist to reality tv how will everyone react?

Without getting further into the book and giving it away I will just say that I was totally shocked and hooked, I needed to know if what was happening was really happening or if it was all part of the show and literally spent one afternoon to finish it up once I got to this point. I could not put the book down.