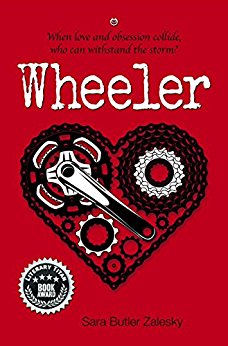 Known as the Ice Queen of the peloton, pro cyclist Loren Mackenzie rarely shows emotion in the heat of competition; she leads her team with quiet strength and determination. But her successes have not come without suffering, and her tragic past is hidden inside tarnished armor.

While out on a training ride with her cycling team near Enfield, England, a chance meeting quickly develops into an unexpected whirlwind romance. But a relationship with an A-list celebrity brings with it the microscope of tabloid-media attention, which expose jealousy and rivalry that threaten to undermine Loren’s leadership of her team.

The new romance also reveals a dangerous obsession, culminating in a terrifying confrontation with someone from Loren’s past. Her injuries not only put her chances at the World Championship in jeopardy but also bring forth memories of a life she had long buried – for good reason.

Can Loren open her heart to the love she has held at a distance, or will her fear ultimately defeat her?

The follow up novel in the Wheeler series is coming soon.

Before beginning my review I just quickly have to thank Xpresso Book Tours for sending me a copy of the book to read and for allowing me to be a part of this book tour.

As a book blogger you tend to want to step outside your normal reading zone every now and then just to read something new and this year I made it a point that I really want to do more of this because I was noticing that I read a lot of the same genre and tend to find that after a while it just all sounds the same. The same story but just by a different author, if that makes sense?

Wheeler was definitely outside what I normal read and I have to say that I enjoyed it this. Its got a little bit of romance and suspense which I think make the book a great read. Its a roller coaster of emotions of highs and lows and I think that is what makes the book a great read. You could tell that this was a passion of Sara’s because she filled you in without over whelming you.

Our main character is Loren and she is a professional cyclist who competes and has earned the nick name Ice Queen because when she competes she shows no emotion what so ever. I have to admit that I don’t know anything about being a professional cyclist and I don’t watch the races so basically I know nothing about this sport but Sara does a fantastic job in bridging the gap so you can understand what is going on.

Loren’s life might seem like its perfect but only Loren knows that things don’t appear as they seem. Loren has a dark past and has endured horrific things but she uses that pain and suffering as her motivation to be the best she can be.

This is where the love interest comes in and that’s in the form of Graham who is a famous actor. At first Loren is weary of accepting his help but figures she has no other choice. You could tell the two hit it off but both walk away without giving each other their numbers. Graham not willing to accept his mistakes remembers Loren’s jersey logo and enlists the help of his agent to track her down and I thought that this was sweet that he just didn’t let this chance encounter pass him by that he actually went out of his way to track her down and so begins their relationship. But can this relationship stand the test of time? What will Loren do when someone else is jealous of this new budding romance?

As the story progresses Loren ends up in a horrific accident and is rushed to the hospital and you know that this is where things start to go wrong and where you are rooting for Loren. Loren is determined to not let anything stand in her way of competing even though she really should be resting and taking it easy.

Enter Loren’s former ex-boyfriend, Felix who is still basically obsessed with her and he will do anything to make her his again. How far will he go?

I am curious to read the follow up to see where they will go with it.