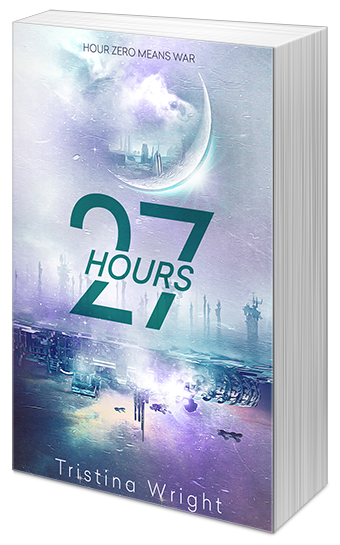 Rumor Mora fears two things: hellhounds too strong for him to kill, and failure. Jude Welton has two dreams: for humans to stop killing monsters, and for his strange abilities to vanish.

Nyx Llorca keeps two secrets: the moon speaks to her, and she’s in love with Dahlia, her best friend. Braeden Tennant wants two things: to get out from his mother’s shadow, and to unlearn Epsilon’s darkest secret.

They’ll both have to commit treason to find the truth.

During one twenty-seven-hour night, if they can’t stop the war between the colonies and the monsters from becoming a war of extinction, the things they wish for will never come true, and the things they fear will be all that’s left.

27 Hours is a sweeping, thrilling story featuring a stellar cast of queer teenagers battling to save their homes and possibly every human on Sahara as the clock ticks down to zero.

Thanks to Chapter by Chapters Book Tour for allowing me to be a part of the tour and for Entangled Teen for sending me a earc of the book to read for my honest and sincere review.

When I first heard about this book earlier this year I knew this would be placed on my wish list asap and I was so so happy I got the email from Chapter by Chapter Book Tours looking for tour host that I quickly jumped on board to do this tour.

This is the first book in the series and I honestly can’t wait to read the next one.

This is a debut novel and it seems like I have been reading quite a few debut novels lately which I absolutely love because its another new author and another new book and series to devour when the rest come out.

As you can guess the story takes place in 27 hours. Which I have to say I am loving this concept of books. Although I didn’t stay up for 27 hours  I did read this fairly quickly and I think if I was younger I would have attempted to do just that to feel as though I was a part of the book. Did anyone else who read this actually do that?

So with it being told in 27 hours you know that the pace of the book will probably hit the ground running and it did. There was enough happening that you wanted to keep reading to find out what was going to happen next and with the twist and turns you had to keep reading and trust me at times I had a hard time to put the book down.

As I was reading this I realized that I have been reading a lot of Sci-Fi/fantasy books lately as you might have noticed. This was once a genre I never would read but I am thinking with just the right books it makes it enjoyable.

I loved that the Tristina included a wide variety of characters in her book. In the past this probably would have been taboo to have in books but I think as things progress we need to have more books with characters that are gay, lesbian, bi-sexual, transgender and asexual. Especially with it hitting so close to home.

I should begin with something that I struggled with and had to have a piece of paper handy to make notes and that was this book is told in several points of view so in order to keep things easy and not complicated I made notes about each character so I wouldn’t confuse them with someone else. With those notes it made things easier.

The setting is quite different from anything I have read before as it takes place on the moon planet called Sahara. Several hundred years ago it was colonized by humans. It was thought that no one lived on the planet even though life could survive on it. This is where the chimera’s come in and they have lived there for many years. The Humans have built a lake and it floods the nest of the chimera’s who needless to say aren’t happy and the two have been fighting ever since.  The chimera’s have attacked the Hub2 and basically killed everyone except one person that is Rumor. Everyone in his colony is dead. The chimera’s have declared war in 27 hours so hence the name of the book.

Can they band together before its too late?

I am excited to see what else will follow this and I definitely want to continue reading this series.