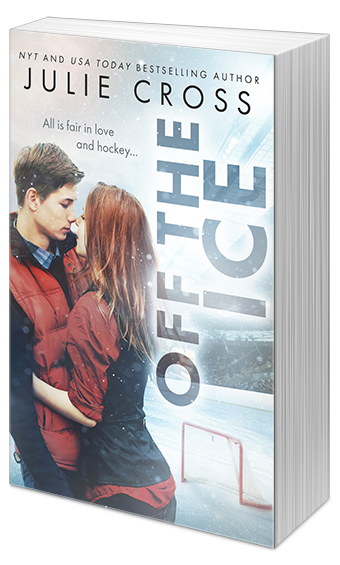 Off the Ice (Juniper Falls #1) by Julie Cross

The NY Times and USA TODAY bestselling author of Whatever Life Throws at You kicks off a brand-new series perfect for fans of Miranda Kennealy and Abbi Glines.

All is fair in love and hockey…

Claire O’Connor is back in Juniper Falls, but that doesn’t mean she wants to be. One semester off, that’s what she promised herself. Just long enough to take care of her father and keep the family business—a hockey bar beside the ice rink—afloat. After that, she’s getting the hell out. Again.

Enter Tate Tanley. What happened between them the night before she left town resurfaces the second they lay eyes on each other. But the guy she remembers has been replaced by a total hottie. When Tate is unexpectedly called in to take over for the hockey team’s star goalie, suddenly he’s in the spotlight and on his way to becoming just another egotistical varsity hockey player. And Claire’s sworn off Juniper Falls hockey players for good.

It’s the absolute worst time to fall in love.

For Tate and Claire, hockey isn’t just a game. And they both might not survive a body check to the heart.

I have to admit that I have heard of Julie Cross before but I have never read any of her books until now and I have to say that I want to run out to the bookstore and pick them up since reading this.

I think Off The Ice is the perfect start to reading her books. If you follow me on social media you will know that I am a hockey mom/manager to my 13 year old son’s team. We have been in the minor hockey world for 5 years now.

Off The Ice takes place in a little town called Juniper Falls in Minnesota where life is centered around hockey. Everyone in Juniper Falls is obsessed with hockey.

The main characters are Tate and Claire. Claire is Tate’s older sisters best friend. Off The Line is told in alternating points of views from both of them. The book begins with Tate’s and its a year before the story line starts. We find out that Claire is leaving Juniper Falls for to attend college to pursue her music/drama career. Her friends have thrown her a going away party. Its within this chapter you are offered hints that Tate  has always had a crush on Claire but he knows she has never felt that same way and just always looked at him like a little brother.

For Tate he is not your typical teenager. He is a teenager with the weight of the world on his shoulders to say the least.  His life is hard and complicated, it shouldn’t have to be for a boy his age but with family issues, (this is where I have to say that I really disliked the dad), hockey obligations (and I know being in minor hockey that sometimes its too much and this is one of the reason’s my son didn’t want to do hockey in high school because of the demand and pressure), pressure from the town and team because of who is father is. Tate’s dad played hockey and he brought his team to the championships and won it so there is pressure to do the same thing.

For Claire, she is the kind of girl that wants to get out of her small town to pursue her dreams of being on Broadway because she has the talents that will take her far and a scholarship to help pursue that dream. I could relate to her because I was the same way growing up. I needed to get out of my small town where everyone knew each other and knew everyone’s business. Sadly Claire only got to experience a year away before being called home to help take care of her ill father and his business.

I loved reading the interaction between Tate and Claire when they saw each other a year later. You can tell the feelings were genuine and sincere and I loved how that built into something and it seemed real and not rushed. I was getting butterflies from reading it.

Living in a hockey city (Montreal) where everyone lives and breathes hockey I can completely understand the intensity a community can have for the game and sport they love. Reading this you know everyone has secrets good and bad and how would a community feel if the dirty little secrets were revealed? Especially if it involved a beloved hero to the community?

This is the first book in a new series that I have to say I am excited to read. I hope this storyline will be expanded.