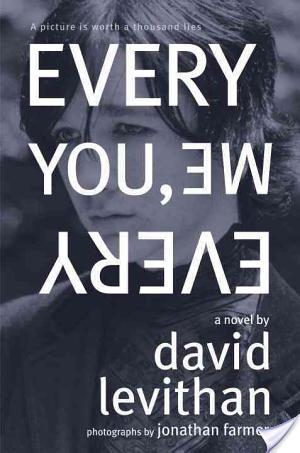 In this high school-set psychological tale, a tormented teen named Evan starts to discover a series of unnerving photographs—some of which feature him. Someone is stalking him . . . messing with him . . . threatening him. Worse, ever since his best friend Ariel has been gone, he's been unable to sleep, spending night after night torturing himself for his role in her absence. And as crazy as it sounds, Evan's starting to believe it's Ariel that's behind all of this, punishing him. But the more Evan starts to unravel the mystery, the more his paranoia and insomnia amplify, and the more he starts to unravel himself. Creatively told with black-and-white photos interspersed between the text so the reader can see the photos that are so unnerving to Evan, Every You, Every Me is a one-of-a-kind departure from a one-of-a-kind author.

As you may or may not know September is National Library Card Signup Month. This fun event is being hosted by Felicia from Geeky Bloggers Book Blog and Jennifer from The Book Nympho . Be sure to stop by their blogs this month to see all their fun and exciting posts.

I mentioned in my post yesterday we are big fans of the library and we all have library cards that we use quite frequently but I have to admit that the cards are used the most June, July and August because that is when the summer reading program begins at our library. Over the course of the three months we borrow alot of books.

Michael picks out things he would like to read and for me I tend to pick out books that are on my wishlist to read or books that I have been meaning to buy and just never did. So this month I am posting reviews of books I have borrowed from the library.

Every You, Every Me was one of those books I had wanted to read when it came out and I admit every time I went to the book store I would pick it up and walk around the store with it and then would put it back. Needless to say it never came home with me.

Image my surprise when I was walking around the library and spotted this book just sitting on top of the trolley, I picked it up and decided okay this time I need to bring it home and read.  I quickly checked it out and decided to sit and read while Michael was doing an activity.

I am not going to get into a big review of this book just because I am sure every one has probably read this already.

I feel bad for saying this but I have never read anything by David Levithan before this and after reading Every You, Every Me that this was probably not the best book to start off with. It was a quick read which was nice   but I didn’t really enjoy the book. I am probably in the minority on this one right?

I liked the concept that Jonathan Farmer had sent photos to David with no idea on how the book would play out and that was a unique concept and David wrote the book based on that. I don’t think this has been done before, correct me if I am wrong please.

I never fully understood the that was happening through out the book. At times I found it very confusing and that might have been one of the reasons I didn’t really like the book. Did this bother anyone else?

When I started to read the book I was interested because you had no idea who anyone was right away and then slowly we find out who people are and you begin to wonder what could have happened to Ariel and who was sending those photos. I think I would have liked to have a little idea of what could have happened in the beginning and not the end. I was thinking that she perhaps ran away/ disappeared or she killed herself and its not revealed until the end.

I was wondering who was leaving the photos and why and I guess I was expecting more of a bang at the end over this and it just felt like that never happened.

Will this stop me from picking up another book by David to read? Nope I am still curious about this writing and books and I do believe I might possibly have one of his books in a box that I will have to dig out once I am done renovating the basement to read.

What is the next book I should pick up by David Levithan to read?

2 thoughts on “Review/ Every You, Every Me”