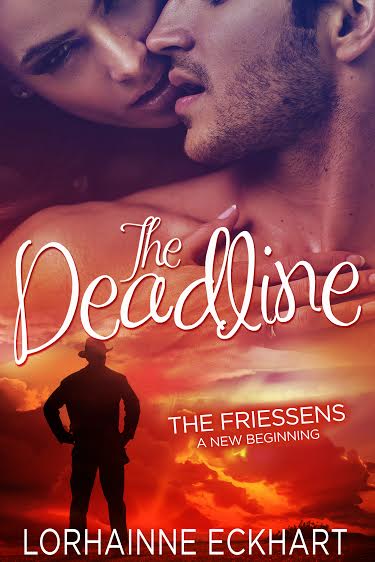 In THE DEADLINE, Andy Friessen has packed up everything and moved his family two states away, to Montana, to protect his wife, Laura, his newborn babies, and his stepson, Gabriel, from the threats of his mother. What Andy doesn’t know is that they’ll soon face a new threat, one he never saw coming.
Gabriel is sick, and a trip to the doctor confirms Laura and Andy’s worst nightmare: Without a lifesaving transplant, their son won’t survive.
What Andy doesn’t count on, as he tracks down the young man who fathered Gabriel, as well as Laura’s estranged parents, is that a whole host of problems are about to be unleashed.

Lorhainne Eckhart is a 2013 Readers Favorite Award winner, frequently a top 100 bestselling author on Amazon in Romance, Westerns and Police Procedural. Author of over 25 titles which includes novels, collections, and short stories. She writes three genres, western romance, romantic suspense and military romance and has sold more than 250,000 eBooks since her bestseller The Forgotten Child landed on the Amazon Bestseller list for Westerns and Western Romance.

The German Foreign rights for The Forgotten Child have since been acquired by a major publisher, retitled The Forgotten Boy and released March 18, 2014, now a top 100 overall bestseller on Amazon. Lorhainne lives on sunny Salt Spring Island with her family where she is working on her next book.

GIVEAWAY PRIZES
Epub or mobi of The Outsider Series: The Complete Omnibus Collection

Epub or mobi of Walk the Right Road: The Complete Collection

One thought on “Book Blitz/ The Deadline”