I don’t think I have ever done a birthday post on my blog and not sure why. But anyways, its Happy Birthday to me today.

This birthday is super special and no I’m not pregnant or turning 50 (although I will be there soon enough) because I will tell you in a bit why its special. 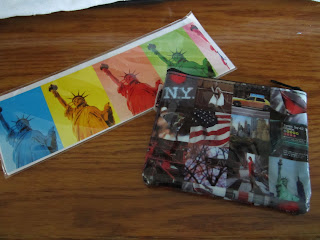 Any ideas why its so special? The hint is in the above photo. Any ideas yet?

I have been given the go a head and I will be going to New York City in May 2013. I was surprised with this cute little Statue of Liberty card and coin purse of various New York City landmarks.

When I had mentioned it earlier in the fall, the answer was no because my mother-in-law wants us to go to Hungary (Budapest) in the summer of 2013 (she wants us to go over before its too late, health wise) and we have been scoping out flights and man its expensive to fly to Hungary with two adults and one child. Thankfully we just have to pay for our plane tickets and a rental car since we would be staying at my mother-in-laws house. So I left it at that until we got to talking about it again and I was asked how much would it cost to go again and was told well we will see how the budget works out.

This will probably be my last time going to NYC and BEA since we are planning a disney trip and perhaps a southern state trip in 2015/2016.

I am super excited to be going again and I have to say I think I like that it will be towards the end of the week instead of in the middle so that I can get more sight seeing in.

Do you have plans on going again in May? I know its early but its nice to ask just the same.

5 thoughts on “Happy Birthday to Me”