Today I was lucky enough to get to spend the morning with an awesome Montreal blogger, Lucy from Moonlight Gleam . Even though Lucy lives about 20 minutes from me it seems like we never get together nearly enough because we are always busy so I was happy when we were able to nail down a date to meet up.

The last few times we have met up for breakfast we have gone to Moe’s which is a fantastic place because it always seems to be quiet and they are never in a rush for us to leave. I wish I would have taken pictures to show you guys the food (next time) but I went with a waffle, with fruit (strawberries, kiwi, banana and these blue small beads -not sure what they were) and an english sause and it was so good.

It was so nice to sit and talk with Lucy because so much has happened since we last seen each other in July. It was great to catch up personally, we talked about books, blog content, politics (since we had a provinical election this week), the book signing we are going to next week and the problems we have encountered but happy to say its been resolved and finally a little bit about BEA.

We are talking about sharing a room for BEA in May. I am already in my planning stages and have started to put money on the side to go.

After breakfast we went to Chapters and browsed around the store. I have to admit I caved and bought a book but it was okay because Lucy gave me permission to (HEHE). I bought

The reason I bought this is because Rosemary Clement-Moore is coming to town next Saturday for a signing and I would love for her to sign it for me. I actually love the cover of this and didn’t realize she had this new book coming out.

After chapters we ended up going to Second Cup for coffee I ended up grabbing two drinks one was a pumpkin spice latte (although the one I had last week was much better) and as I was waiting to pay I noticed that they had a spiced apple cider so I ordered that to drink later. It was so decilious and I think this could possibly be my favorite fall drink. Thnkfully its not super close to wear I live and out of the way so I think I will enjoy it that much more.

While we were at Second Cup, Lucy told me that her post for the Simon  & Schuster Canada Blogger Spotlight was up and I was so happy for her. If you want to check it out click on this and it will take you to it. She is an awesome blogger.

Then after that we quickly ran back to Chapters because I wanted to check to see if they had this magazine RT Book Reviews because when I was in the US (July and August) I was able to pick up Sept and October issues and really enjoyed reading them but sadly they didn’t so we popped over to a magazine store and Lucy was so excited because they had books on sale so she was looking at them while I was looking for the magazine which they didn’t carry.

Before you know it, it was time to leave but before we did I got an amazing package from Lucy. She gave me the following books: 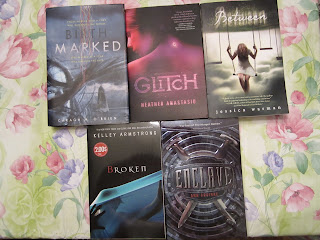 Thank you Lucy for the books. Not only did she give me books but she gave me some awesome goodies. I was like a kid in the candy store when I got home to open everything up. 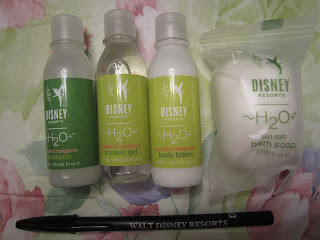 This is a little goodie bag she gave me from her trip to Disney. It contains a pen, soap, shampoo, shower gel and body lotion. I love how its all labelled Disney. Thanks so much Lucy love this and it was so sweet of you to give them to me. 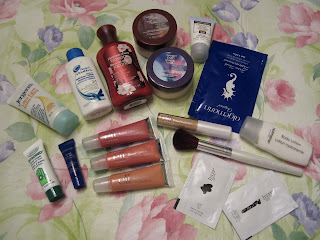 Inside that bag there was also the above goodies. So many great things I am looking forward to trying such as the concealer and the lipglosses as well as the lotions.

It was an awesome day hanging out and I look forward to doing it again so. The next time I will see Lucy will be on the 15th of this month for the author signing.

You know I will be writing about that.

2 thoughts on “Spending the day with a local blogger”