For some reason it always feels like its been months since I last saw Tina from Bookshipper when it reality its only been a month. Thankfully we were able to get together today (Saturday) for breakfast at our regular little breakfast spot in Tina’s neck of the woods.

I was a little late in getting to the restaurant because Michael had hockey camp from 7 to 8:20am and then getting into Tina’s city I hit every single red light on my path. This was a first time thats happened. Thankfully I made it in good time and Tina was still waiting for me 🙂

We quickly ordered breakfast (wish I had taken pics) and I was pretty hungry and ate rather quickly and after breakfast we got to talk. I am really happy that we are getting back onto our monthly breakfast dates again.

I just realized that coming up shortly is our four year anniversary. Its hard to believe I have only known Tina for four years cause it feels like I have known her longer. Tina is an awesome blogger and an amazing friend.

Its always nice to sit and talk with Tina because we talk about everything and its no holds barred. No matter what Tina says she can never ever offend me. LOL This time was no exception we talked about our mailboxes, book requests, life, Tina’s job, traveling and of course BEA.

I am really hoping it will all work out in the end and that we can attend BEA again but if its not meant to be then so be it right? We had this discussion on how things happen for a reason and that things have been mapped out before we were born. I have to admit that I am a firm believer of that.

When it was time to leave I was a little bit sad because the time flew by so quickly and it just felt like we sat down to eat. It always feels like time flies when we get together.

So until our next meet up…….see you soon Tina.

Before we left we did an exchange and you can go to Tina’s blog to see what I passed onto her. Tina graciously passed on her copies of Publisher’s Weekly to me and I love this magazine ever since picking up copies at BEA 2010. I have decided to read these magazines very slowly. Thanks Tina for passing these on to me. 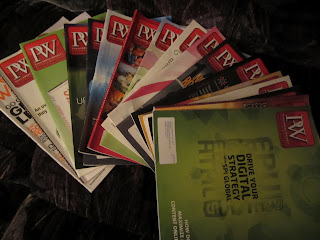