Source: I received a copy of Wacko Academy from the Publisher for my honest and sincere review. I then obtained a signed copy at BEA 2012.

About the book:
You think your school is bad? Eighth grader Lily Mason has enough hassles dealing with siblings, cranky teachers and the cute new guy in school. But when she’s kidnapped and brought to the elite Wackerson (Wacko) Academy, it will take all of her smarts and courage to outwit the school’s treacherous owner – even if it means teaming up with his infuriating and unnecessarily handsome son. At once funny, harrowing and romantic, Wacko Academy is a book that will enthrall and entertain adult and young adult readers alike!

Wacko Academy is Faith Wilkins debut novel. When I was offered this book I knew I wanted to read it because I love supporting debut authors and ones who are young. Faith Wilkins is fifteen years old.

I was really impressed at how well written it was. Not once did I think that this was written by a fifteen year old. Faith did an excellent job with her first book because I literally read it in one sitting. I did pass it around to a few people and they all said the same thing that this was an excellent book and this author has a promising career.

Wacko Academy is the first in a middle grade series called “Wacko Academy”. The second book in the series is Camp Wacko: The Drones of Summer and its schedule to come out in September 2012.

As the book begins we meet Lily Mason who is an incredibly intelligent eighth grader with friends and a fairly normal life. She is basically you girl next door.

No story would be complete without a handsome young boy (even in middle grade books) and so enters Dustin. I’m not sure how I felt about Dustin at first because for some reason I knew something was up when he started to pay close attention to Lily. I was wondering what it was and how quickly would it be revealed.

The two soon became friends. After that we quickly realize that there was more to Dustin then meets the eye and sadly Lily doesn’t see what Dustin is really like but she will soon find out.

Dustin’s dad wants Lily and the plan is to kidnap her and the plan is set into motion although I don’t think it was going fast enough for Dustin’s dad. Once Lily realizes she has been kidnapped, her entire world turns upside down. She quickly realizes that there is more the Wacko Academy that meets the eye. Wacko is like a prison because once you are in you are never leaving.

Lily makes it known to everyone that she doesn’t want to be there and more so when she witnesses more then anyone should. Will Lily be able to get out alive or is she there for life?

I am so excited to read Camp Wacko and I am anxiously awaiting its release.

While I was at BEA I had the chance to meet Faith and she was super sweet and I totally gushed about her book. 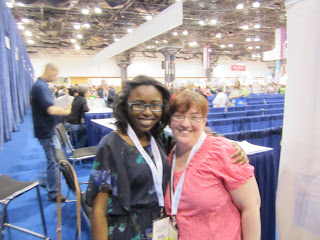 I want to send a thank you to Arundel Publishing for sending me a copy of this book to read and review. I loved the book and plan on sharing with my son’s school. I look forward to the second book coming out this fall.

Thank you Faith for writing such a great middle grade book. I wish you all the success in the world.