One of the advantages to working in my son’s school library is being able to attend author events that the librarian (Thanks Debbie) brings in. This was my first author event and I was super excited to attend.

I arrived late because my son’s class were presenting their poetry projects at the same time. Thankfully the author was doing two readings so I was able to attend the second one.

The funny part is that when I went down to the library the author was engaged in his reading and I really didn’t want to distract the class that was in there so I stayed by the doors and went in during the Q&A.

The author I am talking about is a Canadian and its  Shane Peacock and he is the author of:

This is The Boy Sherlocke Holmes series. The above photos are in order of the series.

Shane graciously signed numerous kids papers and got asked some very interesting questions. After the kids left he graciously took this picture with me and signed some books for me or should I say Michael.

I bought his first book Eye of the Crow because I only had he second one. I will probably buy the other three books very soon. It sounds like a great series for middle grade kids.

Shane also talked about his newest project which is: 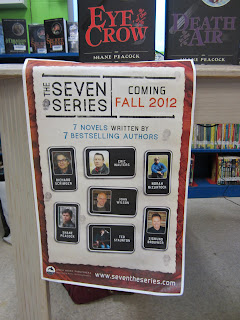 Its a brand new series coming out this fall called Seven The Series . Eric Walters is the author behind this project and its basically  its a story about a beloved grandfather who dies and leaves his grandson the task of spreading his ashes from the top of Mount Kilimanjaro. This is where it gets interesting and exciting because what if he had more than one grandson? What if he had seven?

Hence the name of the series.

Eric Walters (Between Heaven and Earth)

Norah McClintock (Close to the Heel)

Shane Peacock (Last Message)
This sounds like it will be a fantastic read for the boy fans. I will definitely be looking for this series that is schedule to come out in October 2012.

I am also looking forward to seeing Shane again in NYC as he will be there for BEA.

2 thoughts on “A unexpected Author event”