About the book:
Sometimes the best man isn”t even in the wedding party…

Gavin Greene is a hopeless romantic. He”s also a professional one: he writes the wedding column for a Pulitzer Prize-winning newspaper, covering spectacular parties from coast to coast. But there”s a thin line between being a hotshot reporter on assignment…and being a single guy alone on a Saturday night at someone else”s wedding.

Everything changes on New Year”s when Gavin meets Melinda, a travel writer with enchanting dimples. A moonlit stroll across a Manhattan rooftop seals the deal. Until an Aussie with attitude swoops in and whisks her away before Gavin gets her number.

Gavin crisscrosses New York City to find her again. And he learns that there”s something worse than losing the woman of his dreams: Having to write an article about her wedding.

I am excited to share this amazing book and author with you. I got asked to review this book and I loved the description given about the book that I quickly accepted it (please note my review will be posted later this morning) and I was lucky enough to do a Q&A with Devan Sipher which I was excited about. So please let me introduce you to Devan Sipher the author of The Wedding Beat.

Cindy: If The Wedding Beat was to be made into a movie, who could you see playing Gavin and Melinda?

In my mind, I see Paul Rudd or Jason Segel as Gavin. Melinda’s harder. As I wrote the book, I pictured Sarah Jessica Parker, but that’s because I’ve had a crush on her since I was about 12. If Emmy Rossum was older, she’d be ideal. And Anne Hathaway can do no wrong in my eyes – plus she’s got Melinda’s smile.

Cindy: Oh those are great choices. Although I could see Paul Rudd and Anne Hatheway being them. Having written about weddings for the New York Times, what was one of your absolute favorite weddings that you covered?

Weddings are like children. I try not to choose favorites. But one that stands out a bit from the rest took place in a candy store. The bride walked down an aisle lined with lollipop trees and wore a dress made of chocolate wrappers designed for Project Runway (http://www.nytimes.com/2009/04/26/fashion/weddings/26VOWS.html).

Cindy: That must have been an amazing wedding. You must see all kinds of weddings? How long was the writing process for The Wedding Beat?

I wrote the book in over the course of a year and a half, writing six days a week, 12 to 15 hours a day. I didn’t think it was possible to work more hours than I did at The New York Times, but I was wrong.

Cindy: What would be the one spot you would recommend a person see in NYC that is a hidden gem?

I recommend taking the Roosevelt Island tram. It’s a Swiss gondola that carries commuters from Manhattan to a small adjacent island. It also offers one of the most romantic views of the city, especially at night.

Cindy: I will have to look into that as it looks like a great way to see some of the city. What is the next writing project you’re working on?

I’m working on another romantic comedy for my publisher. I’m not supposed to say a lot about it, but I can say that it’s about a couple who make a lot of wrong turns on the way to finding each other. The tagline is “Sometimes love at first sight can take a lifetime.”

Cindy: Oh it sounds really good. I will have to keep my eye out for that.  If you were to give Gavin a theme song what would it be and why?

There’s a song by the group Angels & Airwaves called “Everything’s Magic” that really was Gavin’s theme song as I wrote the book. The song has a strong, driving beat with lyrics that are life-affirming and hopeful. And that’s what I consider the essence of Gavin. The other song that comes to mind is much better known (and a bit corny). But I’d say Gavin’s theme song could also be “Don’t Stop Believin’.” Because he never does.

Cindy: I have never heard of Angels and Airwaves. They sound amazing and I love that song. As for Journey its not corny. Its one of my favorite songs of all time and this is where I have to admit that I had a little crush on Steve Perry. What inspired you to write The Wedding Beat?

For five years, I was a single guy writing the Vows wedding column for The New York Times. “Always a wedding columnist, never a groom” was how The New York Observer put it. I could either look at that as being depressing or the basis of a romantic comedy. I chose the latter. Or maybe it chose me. 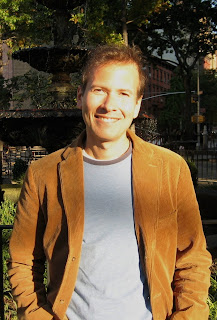