Today I am honored to have Jessica Park the author of Flat Out Love stop by to do a guest post for me today.

Jessica is going to talk about Writing Style Approach to YA.

So my approach to YA has been, um… well, essentially to ignore all the rules. Weird, right? I’m not a fan of following scripts, and convention, and doing what I’m supposed to. I don’t want to write what has already been done. I know that vampire books are selling like crazy, but I didn’t want to write those. I didn’t want to write something just because I thought it would sell or because it’s what the public demanded. Other people can do that better than I can. I wanted to write my book.

So I did. (Can you hear me singing? “I did it myyyyyy waaaaaaay!”)

And considering that Flat-Out Love sales have really started to take off (I’ve somehow sold over 200 books in a week!), and my Amazon rankings have been (for me) great. Not that my sales numbers are staggering, but I’m really pleased. I trust readers more than I trust rule makers. So perhaps my distaste for conforming is paying off.

Now, the publishing industry will tell you a different story. They will tell you that unique does not sell. They want more and more of what they know (or think they know) pulls in huge sales. Not one of the big publishing houses wanted to publish Flat-Out Love. Editors loved it and threw tons of compliments my way, but they all insisted that it wouldn’t sell. I was told repeatedly that “realistic fiction” had taken a dive in the YA market (meaning that I had no vampires, etc. in the book), and that my eighteen-year-old heroine was categorically too old for the market. I thought that both of those things were ridiculous. However, I was well aware when I outlined this book that that eighteen would be considered an “unusual” age by industry standards. But I ignored that standard. The NY publishing industry is dictating what plots and characters should be. I’m just not interested in playing that game.

My character, Julie, needed to be a freshman in college for the story to work. It’s not a high school story. She is at an age when so many changes are going on in her life and it’s really a pivotal time in terms of transitioning to adulthood, navigating romantic relationships, etc. And I refused to budge. It’s a unique story, and it worked the way it was.

I ignored a bunch of rules with Relatively Famous, too. It’s the story of a high school girl, Dani, who finds out that her father, Mark, is a B-list Hollywood action star, and she spends the summer with him in L.A. Yes, I did include a bunch of fun, over-the-top parties and some of the glitz and glamour that one would expect, but I also did a lot of things differently. It’s really about the relationship between Dani and Mark, and how the two navigate the really complicated transitional process of becoming father and daughter. Also, about one-third of the story is told from Mark’s perspective, a storytelling angle that might not be that popular among writers (er, or publishers). But I thought it was really important that readers witness what the father’s experience was, otherwise the story is a totally one-sided account from Dani’s viewpoint. Mark goes through so many changes during the course of the book, and so it adds an important layer of depth that would be otherwise be missing. YA readers are not stupid, and they can be trusted to appreciate an adult’s life.

So my approach to writing? Ignore rules; ignore what I think I’m supposed to do. And I try to tell a good story and trust that my audience will be there for me if I do that. Within that framework, I’ve learned that the more that I allow myself to be vulnerable, to put my heart and emotion into my writing, the more readers connect with the characters. It feels more risky to do that because if I do that and get hateful, scathing reviews, it’ll certainly hurt more! But the payoff is worth it. Nothing means more to me than to hear from a reader that she was up all night because she couldn’t wait to see what happened, or to hear that I made someone laugh, or cry, or feel something. So I’ll lay my heart out there again with the next book. Willingly.

Thanks so much for stopping by Jessica. I loved reading your book and I have to admit I am curious to read your short estory on Facebooking Rick Springfield. I am a huge fan of his. 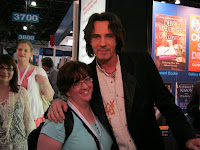 ABOUT THE AUTHOR:
Jessica Park is the author of the young adult novel RELATIVELY FAMOUS, five Gourmet Girl mysteries (written as Jessica Conant-Park) and the e-shorts FACEBOOKING RICK SPRINGFIELD and WHAT THE KID SAYS (Parts 1 & 2). She grew up in the Boston area and then went to Macalester College in frigid St. Paul, Minnesota. During her freshman year, there was a blizzard on Halloween, and she decided that she was not cut out for such torture. So she moved back to the east coast where, she’d forgotten, it still snows. Oops. She now lives in New Hampshire with her husband, son, bananas dog named Fritzy, and two selfish cats. When not writing, she is probably on Facebook , pining over 80s rock stars, or engaging in “Glee” activities. Or some combination of the three. Probably with a coffee in hand.

If you are interested in buying the book you can use either of these links:
For Kindle users and for Nook users.