Yesterday while I was reading my local newspaper I came across this little ad in there for my local indie bookstore: 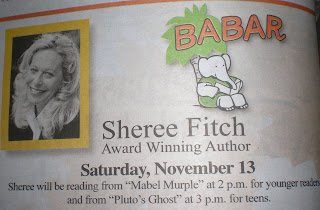 As any book blogger will say they love going to author events and I am no exception especially when they are super close to where I live.

I have to say that before this I have never heard of Sheree Fitch and I have to admit that I am a little ashamed since she is an East Coaster just like me. My Canadian readers will know what I am taking about when I say East Coasters, right guys? For everyone else its referred to as the Atlantic provinces. I grew up in New Brunswick and Sheree was raised in Miramichi (which is actually about 45 minutes to an hour from where I grew up), Moncton, Fredericton New Brunswick. Sheree now lives in Nova Scotia.

She is going to be at Babar promoting two of her books Mable Murple and Pluto’s Ghost. Sheree’s written two adult novels, three young adult books, several children’s books, and much more.

I will be going to the 2pm showing to hear her read Mable Murple because I will be in the village at that time and I am hoping to pick up a copy of Mable Murple and get it signed for Michael and hopefully I will be able to get my copies of Pluto’s Ghost and The Gravesavers signed as well along with some photos. Fingers crossed.

A children’s classic now back in print with new illustrations What if there was a purple planet with purple people on it? Sheree Fitch answers this question with a zany tongue-twister of a poem featuring Mabel Murple, a daredevil who rides a purple motorbike through purple puddles, skis on purple snow, and on her pancakes pours maple syrple. With a rich and vivid purple palette, Sydney Smith’s brand-new illustrations reflect the wild joy in this classic poem.Originally published in 1995, Mabel Murple won the Ann Connor Brimer award for children’s literature.

“Murderer. It’s one kick in the belly of a word isn’t it? Has a taste, too. It tastes like barbed wire and has wild hyena eyes. Murderer. Murder-her. Did he? Did I? That’s when I remember what I want to forget.”

Jake Upshore has loved Skye Derucci since before he can remember. Volatile, complex and frustrated (he’s got a label disorder from all the labels he’s been given) at the best of times, Jake’s on a desperate quest to find Skye before she aborts the baby he believes is his. As he hurtles headlong toward certain tragedy, Jake relives the fatal choices he’s made and the powerful forces that have led him to this to end. A gripping thriller and a heart-wrenching love story, Pluto’s Ghost is a raw and powerful novel about anger, escape, and redemptive love.

You can check out Sheree’s website by clicking on her name.