Tonight Rick Springfield is in town doing his intimate concert (the venue he is playing at isn’t very big). I sadly didn’t get to go and that was because of the price of the tickets that held me back especially with back to school essentials, going to BEA and then Chicago this summer took away a good chuck of money.

As you can see in the photo below I got to meet Rick Springfield this past May when he was at BEA promoting his up coming memoir called Late, Late at Night. If you are a fan you realize the title of his book comes from the song Jessie’s Girl. 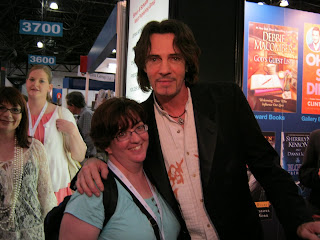 When I was planning my BEA schedule and stumbled upon the fact Rick was going to be there I got excited and I have to admit I made it my mission that I was going to meet him and get his book signed. As you can see I did get to meet him but there wasn’t any books being signed instead he was signing this:

This is actually like a folder. The inside flaps are covered with photos of Rick, album covers, tshirts, buttons, magazines and notes. Then behind those flaps is a two page sample of the book, a note from Rick and info about his book plus a CD of his top 40 hits such as Jessie’s Girl, Don’t Talk to Strangers, Affair of the Heart, Human Touch, Love Somebody and many more.

I was excited to get this cd because I have to admit I do have a bunch of Rick Springfield cassettes, yes you read that right cassettes, so its nice to finally have my favorite songs on cd now.

I love the cd and I have played it way too many times according to Michael. Hey I am a Springfield fan what can I say?

I am anxiously awaiting October 12th for the release of his memoir Late, Late at Night.

About the book:
In a searingly candid memoir which he authored himself, Grammy Award-winning pop icon Rick Springfield pulls back the curtain on his image as a bright, shiny, happy performer to share the startling story of his rise and fall and rise in music, film, and television and his lifelong battle with depression.

In the 1980s, singer-songwriter and actor Rick Springfield seemed to have it all: a megahit single in “Jessie’s Girl,” sold-out concert tours, follow-up hits that sold more than 17 million albums and became the pop soundtrack for an entire generation, and 12 million daily viewers who avidly tuned in to General Hospital to swoon over his portrayal of the handsome Dr. Noah Drake. Yet lurking behind his success as a pop star and soap opera heartthrob and his unstoppable drive was a moody, somber, and dark soul, one filled with depression and insecurity.

In Late, Late at Night, the memoir his millions of fans have been waiting for, Rick takes readers inside the highs and lows of his extraordinary life. By turns winningly funny and heartbreakingly sad, every page resonates with Rick’s witty, wry, self-deprecating, brutally honest voice. On one level, he reveals the inside story of his ride to the top of the entertainment world. On a second, deeper level, he recounts with unsparing candor the forces that have driven his life, including his longtime battle with depression and thoughts of suicide, the shattering death of his father, and his decision to drop out at the absolute peak of fame. Having finally found a more stable equilibrium, Rick’s story is ultimately a positive one, deeply informed by his passion for creative expression through his music, a deep love of his wife of twenty-six years and their two sons, and his life-long quest for spiritual peace.

Can you believe that he is actually 61 years old?