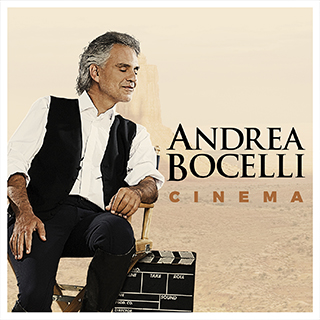 This might come to a complete surprise to you but I enjoy listening to Andrea Bocelli’s music. I was surprised that I got accepted to review his newest cd called Cinema. Cinema features a collection of movie songs etched in the culture and hearts of several generations including epic theme songs featured in films such as “Doctor Zhivago”, “Love Story”, “The Godfather”, “Life is Beautiful”, “Gladiator”, “The Postman”, “Breakfast at Tiffany’s” and many more, as well as popular songs from stage musicals, immortalised by their film versions, such as “West Side Story” and “Evita.”

What I love about the cd is that Andrea has recorded songs in five different languages: Italian, French, Spanish, English and Sicilian. He has also partnered with Arianna Grande and Nicole Scherzinger.

This album is beautiful and I can’t wait for it to be released on the 23rd because I think a few copies will be purchased and given out as gifts this year.

As I sit and listen to the music and write this review I have to say that one of the biggest things that surprised me was E PIU’ TI PENSO duet with Ariana Grande. I think this has to be one of my favorite songs from the cd. This song is suited for her vocally and its done so beautifully. Sends goose bumps all over as you listen to it. Who would have that someone like Ariana Grande could pull of this song?

I love how Andrea puts his own spin on some of the classic hits from the movies its the same song just done in his own magical way that makes you love that piece even more then before.

I have personally always like NO LLORES POR MÍ ARGENTINA but after hearing Nicole Scherzinger sing it I actually like the song even more now. I don’t know if she brings a modern feel to the song but there is just something that like more about this version.

I think this cd will appeal to Andrea’s fans as well as the fans of the movies.

Cinema Track Listing:
1) MARIA from ‘West Side Story’
2) LA CHANSON DE LARA from ‘Doctor Zhivago’
3) MOON RIVER from ‘Breakfast at Tiffany’s’
4) E PIU’ TI PENSO duet with Ariana Grande from ‘Once Upon a Time in America /Malèna’
5) BE MY LOVE from ‘The Toast of New Orleans’
6) THE MUSIC OF THE NIGHT from ‘The Phantom of the Opera’
7) BRUCIA LA TERRA from ‘The Godfather’
8) POR UNA CABEZA from ‘Scent of a Woman’
9) NO LLORES POR MÍ ARGENTINA duet with Nicole Scherzinger from ‘Evita’
10) L’AMORE È UNA COSA MERAVIGLIOSA from ‘Love is a many splendored thing’
11) MI MANCHERAI from ‘Il Postino’
12) CHEEK TO CHEEK duet with Veronica Berti from ‘Top Hat’
13) SORRIDI AMORE VAI from ‘La vita è bella’
14) HISTORIA DE AMOR from ‘Love Story’
15) OL’ MAN RIVER from ‘Show Boat’
16) NELLE TUE MANI (NOW WE ARE FREE) from ‘Gladiator’
Ways to purchase the album
*I-Tunes: http://bit.ly/BocelliCINEMA
*Amazon: http://bit.ly/CINEMABocelli
Ways to connect with Andrea Bocelli
* Official Andrea Bocelli website: http://www.andreabocelli.com
* Twitter –   https://twitter.com/andreabocelli
* Facebook: https://www.facebook.com/andreabocelli
* YouTube : https://www.youtube.com/user/andreabocelli
*Instagram: https://instagram.com/andreabocelliofficial/
With over 80 million albums sold worldwide, this international star who has been honoured with star on the Hollywood Walk of Fame, whose Central Park concert in 2011 entered the history of music as one of the greatest live performances of all time, and who has had the honour of performing live in front of three Presidents of the United States, three popes, and royal families all over the world, is back with an exciting new project, intended as an amazing tribute to the “Seventh Art”.

I participated in the Andrea Bocelli “Cinema” album review program as a member of One2One Network. I was provided an album to review but all opinions are my own.