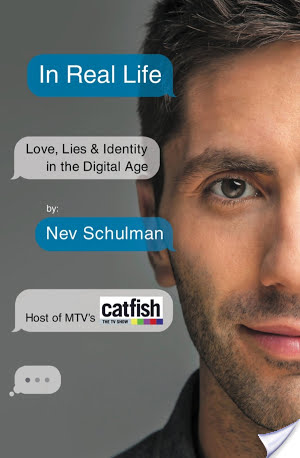 From the host of MTV's #1 show Catfish comes the definitive guide about how to connect with people authentically in today's increasingly digital world.IN REAL LIFE: Love, Lies & Identity in the Digital Age As the host of the wildly popular TV series Catfish which investigates online relationships to determine whether they are based on truth or fiction (spoiler: it's almost always fiction). Nev has become the Dr. Drew of online relationships. His clout in this area springs from his own experience with a deceptive online romance, about which he made a critically acclaimed 2010 documentary (also called Catfish). In that film Nev coined the term

Do you know what “Catfish” means? A catfish is someone who pretends to be someone they’re not using Facebook or other social media to create false identities, particularly to pursue deceptive online romances. Have you ever lied about who you were online?

Nev Schulman, the host of the MTV show Catfish, was a victim of a catfish and this is his personal story. I have been a fan of the show for quite some time now and each and every time I watch it I shake my head and wonder how people can do this to other people? Why do we have to lie about who we are?

In 2007, Nev fell victim to a catfish. With the help of his brother and a friend they tracked down his catfish and discovered that she was a middle aged woman. They turned this into a documentary that ended up being a hit at the Sundance Festival and from their the show was created.

The book touches on his own personal experience as well as his favorite parts of the tv show along with some advise on how you should and shouldn’t act online.

The book is broken down into three sections: Catfishing: A Primer, How to Live and Love Online and How to Live and Love Offline too. Within the book are emails, text, photos and so much more that add to the book. I think this book is really aimed at the teens/young adults instead of my generation.

This was a pretty quick read and I did enjoy reading it. I have never been catfished and I think thats because I am a pretty cautious person when it comes to that because I have been taught if its too good to be true then it probably is.

2 thoughts on “Mini-Review/ In Real Life: Love, Lies & Identity in the Digital Age”