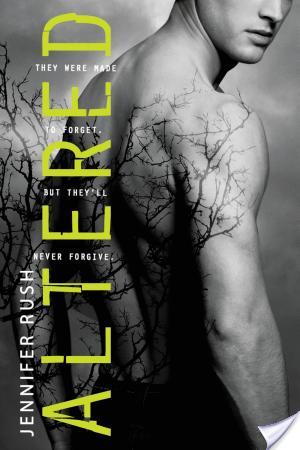 They were made to forget. But they'll never forgive.Everything about Anna's life is a secret. Her father works for the Branch, at the helm of its latest project: monitoring and administering treatments to the four genetically altered boys in the lab below their farmhouse. There's Nick, solemn and brooding; Cas, light-hearted and playful; Trev, smart and caring; and Sam . . . who's stolen Anna's heart.When the Branch decides it's time to take the boys, Sam stages an escape. Anna's father pushes her to go with them, making Sam promise to keep her away from the Branch, at all costs. On the run, with her father's warning in her head, Anna begins to doubt everything she thought she knew about herself. She soon discovers that she and Sam are connected in more ways than either of them expected. And if they're both going to survive, they must piece together the clues of their past before the Branch catches up to them and steals it all away.

As I was cleaning up my blog over the weekend I noticed several posts that were in draft mode and it was mainly a bunch of ideas that I wanted to work on for posts and several reviews of books. Does anyone else do that?
One of the reviews was for Altered by Jennifer Rush. This was her debut novel and for some reason I never posted the review and it wasn’t a complete review so I went to the library to see if I could borrow the book and re-read it since my copy of the book has been either given away or its packed in a box in the basement. I know I did read it all because I have it documented in my note book and its noted review to come so I am sure real life must have gotten in the way or I just thought I had posted it.
Anyways back to Altered. I really enjoyed it. The next book  in the series is Erased and it will be released in paper back in December 2014 and the third book is Reborn and its coming out in hardcover in January 2015. I am looking forward to reading the rest of the books in the series.
I really enjoyed the book and I think I read it rather quickly this time around. I was sucked in right away and had a hard time to put it down at times which for me makes a book that more enjoyable. I love books like that. There is alot going on and it kept you on your toes throughout the book.
One of the things I loved about this book is that Jennifer told the story beautifully. She created a world that wasn’t far fetched if that makes sense and it made you think that this could literally happen next door to you. She didn’t give alot of nonsense to the story and provided just the right of information when you need it, if that makes sense. For me I love a story that has a little back ground to it because you want to know but when it becomes to much information I find it takes away from the book so Jennifer bravo for doing it right. You have earned a fan from me.

I also loved how at every turn you knew something would happen but not quite sure what it would be. I love the element of surprise and Altered has just that. Alot of questions were answered as the story went along and she did leave you with a cliff hanger that left you wanting to read more. I will have to check to see if book two is available.

If your a young adult who loves action, mystery and suspense then this is the book for you. There isn’t much romance happening and you would think there would be some with some hot guys (Nick, Trev, Cas and Sam) running around with you but there isn’t although at times I thought there might be. I do have to say that I did secretly crush and hoped Anna would fall for Trev. Trev would be my dream guy because not only was he tall, dark and handsome but he was a reader and he loved to read. How can you not fall in love with someone like that?
Growing up Anna always knew her dad was up to something but wasn’t completely sure until she was old enough when her father would allow her to come and help him in his secret lab. I always thought it was a little weird that she didn’t fully know what was going on just feet away from her. I guess maybe she thought that was normal but I know I would have been like wow four hot guys being held in my basement, I need to do something.
It was nice to see Anna grow into her character as the book progressed. She started out as the shy awkward kid and then grew  into a force to be reckoned with.
I can’t wait to read Erased and dig more into the storyline and characters.
What you read this series? What did you think of it?