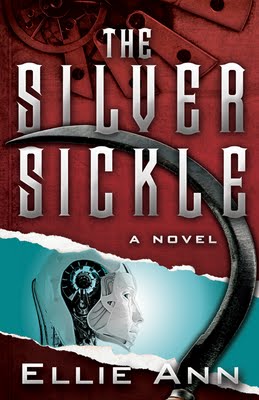 THE SILVER SICKLE is for fans of steampunk, cyberpunk, Veronica Roth, Scott Westerfield, and Allie Condie.

BOOK DESCRIPTION:
The end of humanity will come through the Silver Sickle . . .

Farissa lives every moment with reckless abandon, for it may be her last. Any day now, the alien goddesses will harvest her and take her to the mysterious Silver Sickle, never to return. She’s accepted that. What she can’t accept is this new idea of freedom Zel has planted in her head. She’d give almost anything to be with Zel, but how can she run from her destiny if it means putting the whole kingdom in danger?

Everyone in the desert kingdom believes the goddesses are immortal, but Zel has invented a way to kill them. Now all he has to do is convince Farissa to run away with him and plant a seed of hope in her heart that she’s not destined to die. Little does he know that one seed of hope could change the course of the future.

For some reason I thought this was Ellie Ann’s debut novel but I was wrong. She is one of the authors of the Sarah Steele thriller books.

I am going to be completely honest with you and let you know that I don’t read alot of fantasy or sci fi books and that is just because I never really found the one that would draw me into the genre of books. I have tried several times with various authors and sadly never got to my 50 page limit in those books. That was until The Silver Sickle showed up in my email.

Now will I continue to read this genre of books, I think if I had the right one I would pick it up to read. With that being said I have to say that I really enjoyed this book. I went in with the attitude of hey just read it and give it a try and I am happy that I did. It wasn’t a super quick read for me and that was mainly because I paced myself. I wanted to enjoy every minute of it.

Ellie Ann did an exceptional job of creating this world of Dyn for her characters. It was a world that you could actually invision happening. I loved the characters and the way they were told in the story.

I think one of the things that really drew me in was the main character Farissa. She was a kick ass character and it was nice to see a book with a strong character like that.  Can I just say that I loved Zel. You could so see how much he cared and admired Farissa and he would do anything for her. Little does Zel know but Farissa feels the same way but she doesn’t want him to know because she loves him enough to want to protect him. I loved these two characters.

The Silver Sickle is told in the point of view of the three main characters of the book Farissa, Zel and Gira. Gira is the leader of the Amar and this group basically wants to take over the world. Will the Amar succeed?

There is so much more I want to tell you about the book so I think she should pick it up to read so that you can find out for yourselves how good a book this is.

2 thoughts on “Review/ The Silver Sickle”