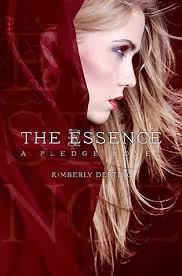 Source: I bought The Essence when it came out last year.

“Danger, dread, mystery, and romance” (Booklist) continue in the second book of The Pledge trilogy, as Charlie’s reign is under siege from the most unusual of enemies.At the luminous conclusion of The Pledge, Charlaina defeated the tyrant Sabara and took her place as Queen of Ludania. But Charlie knows that Sabara has not disappeared: The evil queen’s Essence is fused to Charlie’s psyche, ready to arise at the first sign of weakness.

Charlie is not weak, but she’s being pushed to the brink. In addition to suppressing the ever-present influence of Sabara, she’s busy being queen-and battling a growing resistance determined to return Ludania to its discriminatory caste system. Charlie wants to be the same girl Max loves, who Brook trusts, but she’s Your Majesty now, and she feels torn in two.

As Charlie journeys to an annual summit to meet with leaders of nearby Queendoms-an event where her ability to understand all languages will be the utmost asset-she is faced with the ultimate betrayal. And the only person she can turn to for help is the evil soul residing within.

This is the second book in The Pledge series by Kimberly Derting. The first book is The Pledge (you can click on the title to bring you to my review) and the third is The Offering, which I will be reading very soon.

The Essence picks up right where The Pledge left off which I really enjoy since I am reading the books back to back.

Charlie is still getting use to her role as the Queen and she finds it difficult but I think she is adjusting very well. Its alot to learn and she is still dealing with the essence of Sabara that is within her. I have to say that I love that Kimberly didn’t change the character once she became the Queen and she wrote showing how much of a struggle it is and that Charlie just didn’t adapt quickly into this position.

I loved how Charlie is still staying true and her wanting to make a change for the people. I don’t feel as though she is going about it too fast but I am sure their are some people of Ludania who think she is going about it too fast and they want her gone from the throne. The don’t agree with what she wants and that is too be expected because the people of Ludania don’t know anything else.

The Essence is mainly about Charlie going to the Summit to meet the other Queens of Queendoms. Charlie is nervous because she knows she is the youngest and worries about how they will except her, if they except her. Along the journey to the Summit, Charlie discovers there are people out there plotting to assassinate her.

Will Charlie be able to escape this assassination? Will she discover who is behind it before its too late?

For me this was a real page turner and I had to keep reading because I needed to find out who the assassine was. I thought at points in the book I had it figured out but then was completely wrong. I loved how the characters didn’t know right away either.

I also have to say I loved how all the characters were brought back into the book and more of a storyline was given to them. You got to know the characters much more and the story behind them which I love because when I am reading a series especially I want to know how the relate to the main character and story of the book.

I’m looking forward to finding out the history between Sabara and Niko a little more. Thankfully I have The Offering so I will be continuing the series.

I have to say that I am really impressed with Kimberly’s writing and I am pretty sure after I am done this series I will have to dig out The Body Finder series that I have of hers.