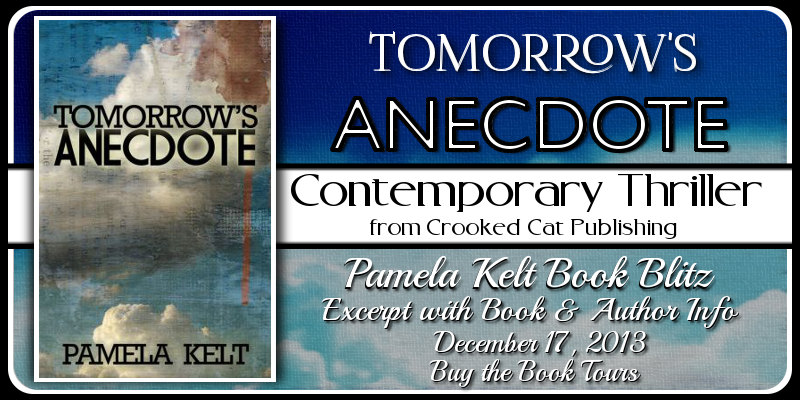 Just another day in the the newsroom? Hardly.

October 1987. Clare Forester is an overworked and under-appreciated features subeditor on a provincial paper in Somerset. She spends her time cheerfully ranting about her teenage daughter, the reclusive lodger, her spiteful mother, the Thatcher government, new technology, grubby journalists, petty union officials, her charming ex – and just about anything else that crosses her path.

If things aren’t turbulent enough, on the night of Thursday, October 15th, the Great Storm sweeps across Britain, cutting a swathe of destruction across the country.

As she contemplates the chaos that her life has become, Clare soon comes to a bitter conclusion.
Never trust the past. It lies.

Pamela Kelt first managed to avoid any semblance of a day job by taking Spanish at the University of Manchester. On completion of the degree and after a subsequent six brain-fogging months on a local paper, she fled to Oxford and completed her M. Litt. thesis on ‘Comic aspects of satirical 17th-century comic interludes’, which was not only much more fun, but strangely relevant to coping with the vagaries of the 21st century. After becoming a technical translator, she discovered that English was easier, and did copywriting for anyone who would pay.

On a stint in Australia, she landed a job as a subeditor and returned to journalism, relishing the chance to come up with funny headlines in a variety of provincial papers. Ah. Once a pun a time.

As her academic husband became a chemistry professor in something even she can’t spell, Pam moved into the more sensible world of educational magazines and online publishing – for a while, at least. A daughter arrived and reintroduced her to the delights of fiction, which she’d sort of forgotten about. So, one fine day, while walking the dogs at a local beauty spot, thinking ‘to hell with a career’, Pam took the plunge into writing for herself, and is now the author of six books to date (including one co-written with aforementioned prof) ranging from historical drama by way of teen fantasy to retro mystery.

No-one could have seen the line of trees falling like dominoes as they toppled towards the A36 under cover of darkness that Thursday evening. One minute, I was driving back in a rental car from Brighton to the West Country, my shoulders aching with keeping it on the road as a crosswind buffeted. The next, I was slowing down to tackle a tricky bend when a giant tree trunk landed on the bonnet with an almighty thump.

As the car juddered to a standstill, I rammed on the brakes out of instinct. The seatbelt cut into my neck as I lurched forwards, then back, just like a test mannequin. For a moment, I sat there, pulse palpitating, still gripping the wheel. Then I counted to ten, opened my eyes and found myself staring out at a confused mass of branches and yellowing leaves. They glowed oddly in the light of my remaining headlamp. It was like being upside-down in a tree house, but much less fun.
If I’d arrived at that spot a split second later, the tree would have landed plum on the roof. And me. My chest hurt. I realised the steering wheel was crushing my sternum.

The crash had shunted my seat forward. Hands shaking, I fumbled for the belt release, and pinged it loose. Wincing, I bent down and yanked at the floor-level bar, shoving backwards with the balls of my feet.

Nothing. Grunting with the effort, I tried again to no avail. The sliding mechanism must have jammed in the crash.

At that point, the electrics gave up and everything went pitch black. My forehead ached. I must have hit my head against the steering wheel. Darkness seeped into my mind and I slumped in my seat, semi-conscious.

My brain seemed to float away from my body and I began to relive the past three days I had spent in a ghastly Portakabin where I had endured the vilest form of professional torture … that most feared phenomenon of all, The Management Course.

Authors’ Cafe
Christine’s Words
Tales of a Book Addict
3 Partners in Shopping Nana, Mommy, & Sissy, Too!
Nancy Jardine features
Night Owl Reviews
For Whom the Books Toll
Cindy’s Love of Books
Loralee Lillibridge – Blogging Across the Back Fence
Margo Hoornstra – Writing Inside & Out
What Readers Want
Romance Me
Finding Fantastical Books
copyright 2010, Cindy (Cindy’s Love Of Books)
If you are reading this on a blog or website other than Cindy’s Love Of Books or via a feedreader, this content has been stolen and used without permission.