Today I am happy to be on the virtual book tour for Plant Teacher by Caroline Alethia.  I am happy to showcase her book and have Caroline stop by for a guest post. 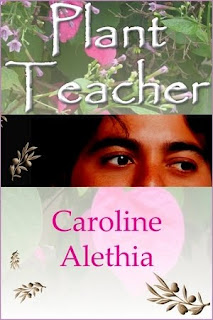 Hailed by Huffington Post contributor Joel Hirst as a compelling and powerful story, Plant Teacher begins in 1972 when a hippie in Oakland, California flushes a syringe of LSD down a toilet. Thirty-five years later, the wayward drug paraphernalia has found its final resting place in Los Yungas, Bolivia, the umbilical cord between the Andes and Amazonia.

Enter into this picture two young Americans, Cheryl Lewis, trying to forge her future in La Paz and Martin Banzer, trying to come to terms with his past in the same city. The two form an unlikely friendship against the backdrop of a country teetering at the brink of dictatorship and revolution.

Bolivia sparks the taste for adventure in both young people and Martin finds himself experimenting with indigenous hallucinogenic plants while Cheryl flits from one personal relationship to another. Meanwhile, the syringe buried in the silt in a marsh in Los Yungas will shape their destinies more than either could anticipate or desire.

Plant Teacher takes its readers on a fast-paced tour from the hippie excesses of Oakland, to the great streams of the Pacific Ocean and to the countryside, cities, natural wonders and ancient ruins of Bolivia. It reveals­ the mundane and the magical, and, along the way, readers glimpse the lives of everyday Bolivians struggling to establish equanimity or merely eke out a living during drastic political crisis.

The normal, the unusual, and the paranormal in Plant Teacher

Cindy, thank you so much for inviting me to your web space.

People have asked me about the novel Plant Teacher and how I made Bolivia seem so real. I was fortunate to live in this remote South American country from 2007 to 2008 when President Evo Morales was consolidating his grasp on power. I say that I was “fortunate” because even though the country was going through an upheaval, I think it is an honor and a responsibility to witness what the Chinese proverbially describe as “interesting” times.

Imagine a country crippled by hunger strikes. The main city plazas are filled with tents, packed with people patiently waiting in hammocks and slowly sipping nothing but water. They read magazines and newspapers. Television cameras have sprung up at every corner. Ambulances wait at the end of the streets.

And what do you do? Because you are not Bolivian and you are not a member of the media, you walk through this spectacle, station yourself at your favorite table at your favorite café, and order a cappuccino and read the news. Inside the café, dozens of other people nibble on cakes and sip their drinks and read and carry on their lives as if nothing is going on outside.

In the evenings, you sit with your landlord and the other guests at your pensión (guest house) while the guests drink beers mixed with sodas and casually talk about the possibility of a civil war. At night, demonstrators crowd the streets with banners and torches and they look ominous. Unlike the passive civil disobedience that is taught in this country, protestors let off firecrackers and the streets, at night, sound as if they are filled with gunshots.

In our pensión courtyard, we continue with our drinks and maybe take a brief dip in the pool.

There is one resounding lesson I learned during my time in Bolivia: Human beings need normalcy. When times are not normal, people will go on as if life is normal—visiting their favorite coffee shops, following their regular routines—to the extent that circumstances allow. The prospect of dictatorship and civil war are so big, that many people can only partially grasp these concepts. They sweep their front doorsteps; they do their laundry; they show up at work.

Martin Banzer, in Plant Teacher, has a South American bad adventure of a different kind. After experimenting with an indigenous hallucinogenic drug, caapi, he must contend with the after-effects of his drug experience. He must teach his English classes and chat with his friends and read emails from his family while he is having flashbacks. While experiencing the paranormal, Martin must appear to be normal.

I wrote Martin’s character and I set him in Bolivia because, despite my cappuccinos and my dips in the pool, I realized I had witnessed a story that I was required to tell. As a country slowly loses its freedom with one nondemocratic act followed by another, and as the world abroad simply ignores or doesn’t understand, the country—my host country, Bolivia—cries for you to tell her story.

Plant Teacher is the story of Martin, trying to be normal, and of Bolivia, struggling in times that should never be considered normal. The story of Bolivia continues. People have been arrested. People have died. The machinery of the Morales regime moves steadily forward. I hope that Plant Teacher entertains, but I also hope that this novel about troubled times reminds us in the North of just how precious and precarious democracy can be.

Caroline Alethia is a freelance writer whose work has appeared in newspapers, magazines, on radio and in web outlets. Her words have reached audiences on six continents. She lived in Bolivia and was a witness to many of the events described in Plant Teacher.

Thanks so much Caroline for taking the time out of your busy tour schedule to do this guest post for me and a huge thank you to Dorothy at Pump Up Your Book for arranging all this.