I have a confession to make. Even though I live in the burbs of Montreal I rarely make the trek down town. I probably have been down there a few dozen times. That’s not much is it?

I go down town for special occasions such as meeting up with the Montreal Book Bloggers, concerts (even though its been over 8 years ago), to take the train, (ie NYC), a movie premier or author events.

To my defence the reason I don’t go downtown is because everything I need is literally close by. I could say I live in a mini down town version. So why would I fight the traffic and parking when its so close by?

Well on Saturday, November 5th I ventured downtown to go to a author signing with some bloggers. I have to say I almost had a mini panic attack because I had text both Lucy from Moonlight Gleam’s Bookshelf and Tina from Bookshipper to let them know I was on the bus making my way down when they text me to say that the event was not at 3pm but 2pm. I worried I wasn’t going to make it because of all the construction going on and the bus was a on mini tour de l’isle. (tour of the island).

Thankfully I arrived safe and sound and just a few minutes before 2pm. I was happy to see Tina , Lucy, Lisa and Tynga were there and its been awhile since I saw most of them. It gave us all a chance to talk and catch up. The time just flew by.

﻿﻿﻿Linda was so very gracious with us. We spoke to her for the longest time and it was so nice to have her here talking about Sins of the Angel, her next book, the covers and so much more. I think we all got a little fan girlish. 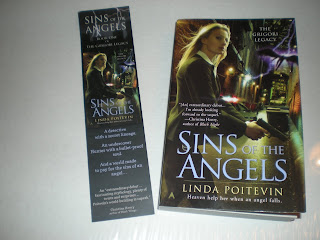 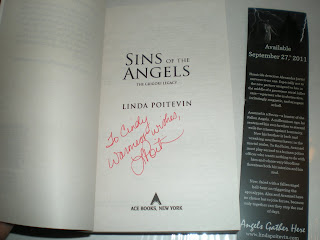 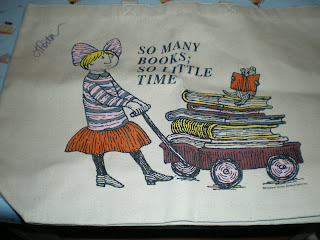 I also got her to sign my tote bag. I think this will be something I will do from now on.

When Linda arrived they set up an easel that showcased some of the top reviews of the book and Tynga was mentioned which was a total surprise to her. As you can see Tynga is beaming in this picture. Way to go Tynga. The next time I see you I will have to get you to sign my book. Wink Wink hehe. 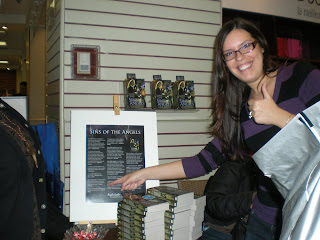 Be sure to check out Linda’s site http://www.lindapoitevin.com/

A detective with a secret lineage. An undercover Hunter with a bullet-proof soul. And a world made to pay for the sins of an angel…

Homicide detective Alexandra Jarvis answers to no one. Especially not to the new partner assigned to her in the middle of a gruesome serial killer case—a partner who is obstructive, irritatingly magnetic, and arrogant as hell.

Aramael is a Power—a hunter of the Fallen Angels. A millennium ago, he sentenced his own brother to eternal exile for crimes against humanity. Now his brother is back and wreaking murderous havoc in the mortal realm. To find him, Aramael must play second to a human police officer who wants nothing to do with him and whose very bloodline threatens both his mission and his soul.

Now, faced with a fallen angel hell-bent on triggering the apocalypse, Alex and Aramael have no choice but to join forces, because only together can they stop the end of days.

Thanks to Tynga for showcasing this book and loving it so much because I bought and read this book because of you and thanks you Linda for coming to Montreal for the signing. Can’t wait for you next book to come out and perhaps go to the launch in Ottawa when it does.

Linda if you are ever interested in doing a Q&A please let me know.

So readers what are you waiting for? Go out and buy this fantastic book.