Today I am very honored to have Brenda L. Baker stop by Cindy’s Love of Books to do a guest post for me. This is Brenda’s debut novel. Please come back tomorrow for my review of Sisters of the Sari.

I got to ask Brenda about her experiences of teaching in India and this is what she had to say:

Here’s a confession – when I signed up as a volunteer tourist in India, it was the tourist part of the assignment I was interested in. I travel to meet people and volunteering seemed like the perfect way to meet lots of them. If anyone got helped along the way, that would be gravy.

On my first day at the Madras Christian Council of Social Service in Chennai, I met the social workers and office staff (plus), discovered the office language was Tamil (minus) and learned my laptop was going to be more useful to my new friends than I was. The office had five, vintage, virus-laden computers loaded with antique pirated software and only sporadically connected to the internet. My VIAO was an object of wonder. Isabel, the woman who ran the organization, suggested I try my hand at teaching English to the women in two shelters run by the social workers, probably to get my laptop out of the office so people would get back to work. I’d never taught anyone in my life, but I knew the subject pretty well. How hard could it be?

When I walked across the street to the shelters – they were upstairs and downstairs in the same building – I found out exactly how hard it would be. The warden gave me a blackboard that wouldn’t have looked out of place in a Victorian schoolroom circa 1850, and a one inch piece of chalk, then placed me in front of forty women in nightgowns and left. The blackboard was so cracked and warped the words I wrote on it looked like they were underwater, but this didn’t really matter because there were no notebooks and pens for my students to write with.

I asked if anyone spoke English. A sleepy young woman named Viji held up her hand and instantly became the official student-translator. I set out to learn my students’ names and find out how much they knew. Some of them were illiterate not only in English, but in their native language of Tamil. A few knew the English alphabet. A few more knew stilted phrases like “How do you do?” and “What is your good name?”, invariably spoken with a weird semi-British accent, the verbal equivalent of extending a pinky when lifting a teacup. About halfway through the introductions, my translator fell asleep. (I later found out she was on medication.) I finished up the lesson by teaching them the alphabet song, then went back to the office to ask for notebooks and pens and more chalk.

When I carried the new supplies over to the shelter the next day, only twenty women sat around me in a semi-circle. The rest were sleeping or sitting against the far wall chatting. Viji managed to stay awake a little longer and by the end of the lesson, everyone had taken a turn at saying “Hello. My name is ____” and could recognize at least some letters of the English alphabet. In exchange, they taught me the same phrase in Tamil and started me out with my first two letters in the in the two-hundred plus Tamil alphabet.

Lesson three was given to fifteen women, only three of whom still had their notebooks and pens. The rest had been “lost” or “stolen”. I learned two more Tamil letters and we exchanged words for body parts. Lesson four was given to twelve women, ten of whom had managed to retain the replacement notebooks and pens I’d handed out. I learned two more Tamil letters and the Tamil words for beautiful and happy. Not sure what they learned.

Over the next three months, I tried everything I could think of to teach my students English without textbooks and teaching aids. We played games and had contests. I gave one-question tests and handed out prizes for passing. I think most of the women attended class for the comedy value of watching me act out vocabulary words after Viji fell asleep. Eventually even that paled. One day I walked over to the shelter and no one had turned up for class, my last three die-hard students had found part-time jobs.

I took my laptop back into the office and spent the rest of my volunteer tour creating PowerPoint presentations for Isabel to use when she gave talks and writing funding proposals for various projects managed by the organization. This turned out to be a much more productive use of my time, since Isabel’s illustrated talks helped raise awareness, and one of my proposals encouraged the Tamil Nadu government to cough up funding for a project.

Was my teaching effort wasted? Heck no. For one thing, I learned a little Tamil. More importantly, by showing up every day, I gained acceptance in the shelters, became part of their daily life. I still went to visit them after working in the office. With no agenda and no sense of responsibility, I began to look forward to these social afternoons. I played with their children, admired their singing and dancing and learned about their hopes and dreams when someone was around to translate. At Christmas, the shelter received a donation of new clothing from a local school. I funded a bus trip to a carnival so they could show off their new outfits and in return, had one of my happiest days in India as I watched them enjoy the novelty of an outing.

As far as I’m concerned, my brief foray into teaching was a howling success. I did what I set out to do – met lots of wonderful people 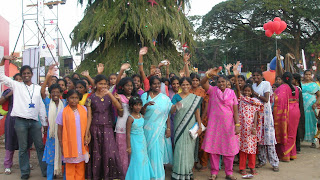 Thanks again to Brenda L. Baker for stopping by and be sure to check out her site and don’t forget to come back tomorrow for my review of Sister of the Sari.