When I got asked to review Spin earlier in January (2010) I was really excited because I found out that Catherine McKenzie was a local author. I love supporting local authors.

Shortly into January I got an email saying that Catherine was going to be doing a book signing at Chapters/Indigo down town. I was super excited and ready to go, but unfortunately I was still sick and didn’t want to chance going down in fear I would cough to death or make others around me sick so I stayed home. I was disappointed.

Then in March I got another note saying that Catherine was going to be doing another signing at the Chapters near me in April. I quickly marked it down and pre warned everyone in advance that I was going to get my copy signed. 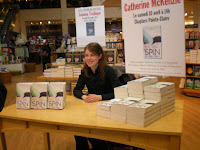 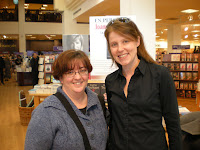 Donna from BooksBound came with me and she took the picture of Catherine and me.

It was really nice as we got to speak to Catherine and she is working on her second book which is going to be coming out in January 2011. Can’t wait to read it. I also got to meet her mother who stopped by as well. Catherine is just as sweet and nice in person as she is via twitter @CEMcKenzie1 and emails.

Another local author, Laura Fabiani was there to show Catherine support. I read her book Daughter of Mine in January, 2009. I got to meet Laura when she delivered her book for me to read.

I knew that Laura was coming so I was on the look out for her. We finally got to meet up and talked. Laura also is working on her next book which will be a trilogy dealing with time travel I believe. Another upcoming book to look forward to. 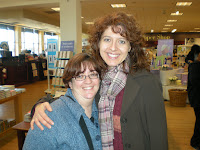 Laura is another one of those authors that its always a pleasure to speak with via emails and she is just as nice in person. I have to thank Catherine for taking this picture of Laura and I.

Of course no trip to Chapters can be complete without buying books. I did buy a few books, four in total but ended up returning three of them on Monday. I kept The Reckoning by Kelley Armstrong. As that was the one I had intended to buy before walking into the store.